Amar Singh, 64, died in Singapore, where he had gone in March for surgery in a kidney-related illness. 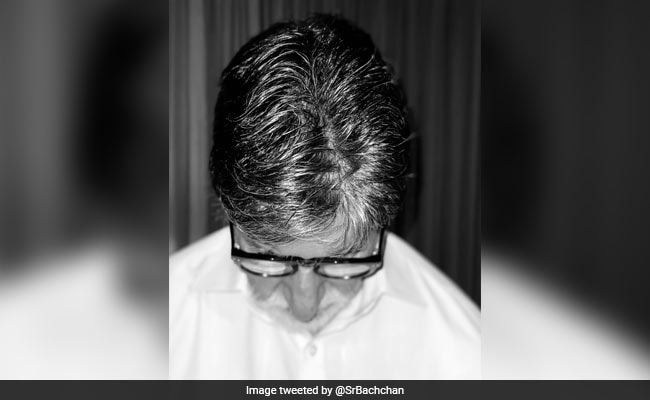 Amitabh Bachchan is recuperating from COVID-19 in a Mumbai hospital.

Actor Amitabh Bachchan on Saturday shared on Twitter a black-and-white photograph in which he appears to be solemnly bowing his head in respect. The image did not accompany any words but came hours after his estranged friend Amar Singh died from a long illness. The actor is recuperating from COVID-19 in a Mumbai hospital along with his son Abhishek Bachchan.

Rajya Sabha MP Amar Singh, 64, a prominent politician who had a falling-out with the Samajwadi Party leadership in 2010, died in Singapore, where he had gone in March for surgery for a kidney-related illness.

Prime Minster Narendra Modi, Lok Sabha Speaker Om Birla and several politicians were quick to condole the death of the leader, who was known for his friendships across the political spectrum.

The reaction from Amar Singh's old friend - Mr Bachchan- however, came much later. Before tweeting, the actor shared the same photograph on his blog with a Hindi couplet - but without mentioning Amar Singh.

"I am stricken by sorrow, my head is bowed, only prayers remain, the soul that was close to my heart has gone forever," he wrote in Hindi.

Mr Singh, who is often credited for bringing Mr Bachchan's wife Jaya Bachchan into politics, used to be seen with one of Bollywood's most prominent families in public functions before 2010. He would call Mr Bachchan his elder brother. The rift in their relationship came after Mr Singh was expelled from the Samajwadi Party.

"There is no anger for Bachchan family. Politics is always separate from family relations. If Jaya ji wants to remain within SP then I would like to wish her all the best," he had said in 2010.

However, the anger was palpable in Mr Singh's comments over years. In 2018, he said Ms Bachchan was not a mass leader.

"...she is not a mass leader, she dislikes people. If photographers take her snap, she snatches away the camera. If any smelly person comes near her, she says 'keep this dhoti prasad away from me'. She belongs to the elite class," Mr Singh had said.

Mr Bachchan's warm gesture in February this year, however, brought about a change of heart in the ailing leader. After receiving Mr Bachchan's message on the death anniversary of his father, Amar Singh released a video expressing "regret" over his behaviour towards Mr Bachchan and his family.

"If not anything, he was elder to me. I should have been sober to him. I realise, I must express regret for the harsh words I used (against them). In my mind, more than hatred, I had disappointment towards his behaviour. But it seems, he never had any disappointment, nor bitterness in him (against me)," he had said.