Mr Bachchan's profile photo was changed to that of Pakistan Prime Minister Imran Khan along with two different tweets tagging the Pakistan premier along with his photo, saying "Love Pakistan" 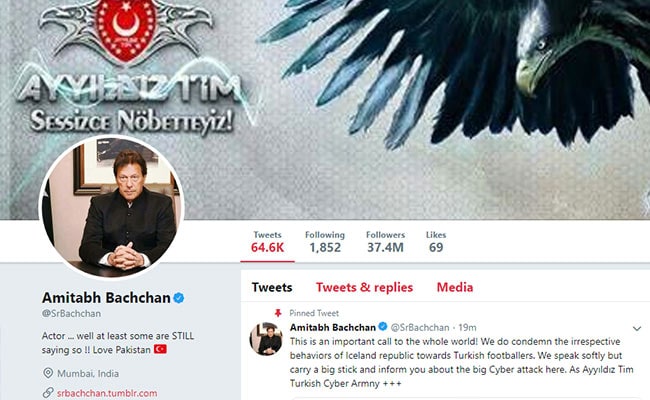 Veteran actor Amitabh Bachchan's Twitter account, which was hacked on Monday, has now been restored. Those behind the cyber-attack changed his profile photo, cover photo and Twitter bio. Mr Bachchan's profile photo was changed to that of Pakistan Prime Minister Imran Khan. Two different tweets were posted as well, tagging the Pakistan premier along with his photo, saying "Love Pakistan". The tweets were accompanied with emojis of Pakistan and Turkey's flags. Mr Bachchan's bio was modified to say the same thing as well.

At first glance, the hack seemed to have been carried out by one or more Turkish groups.

Another tweet posted by the hackers from Mr Bachchan's account called to "condemn the behaviors of Iceland republic towards Turkish footballers".

"We speak softly but carry a big stick and inform you about the big Cyber attack here," the pinned tweet said and was signed off by the "Ayyildiz Tim Turkish Cyber Armny."

In yet another tweet, the hackers posted a link to an Instagram page, saying they were "waiting for your support."

A spokesperson for Mumbai police said their cyber unit was informed of the hack and the matter was being investigated, reported news agency PTI.

The same group had earlier hacked the accounts of actors Shahid Kapoor and Anupam Kher, according to PTI.

Amitabh Bachchan is one of the most active Bollywood celebrities on Twitter. He has over 37 million followers on the micro-blogging site.