With 13 New Entrants For Starters, Amit Shah Warns Trinamool Of A Tsunami Of Defections

Amit Shah will be visiting West Bengal every month till the assembly polls, the BJP had said.

Union Home Minister Amit Shah today warned West Bengal Chief Minister Mamata Banerjee of such a tsunami of defections from "Trinamool" Congress ahead of the state Assembly polls that by the end of it she would left all alone. To make his point, the senior BJP leader today got to parade 13 new faces who had joined his party, the most important of them being former West Bengal cabinet minister Suvendu Adhikari.

This included Left and Congress MLAs, too.

Expressing confidence about replacing the Trinamool government after the 2021 assembly polls, Mr Shah promised to transform West Bengal into "sonal Bangla" (Golden Bengal) once elected, under the guidance of Prime Minister Narendra Modi.

Earlier, he cited the examples of freedom fighters like Khudiram Bose and Ramprasad Bismil to tell political rivals not to indulge in regionalism, referring to such tactics as "shallow politics" that ought to be shunned.

Paying floral tributes to the revolutionary Khudiram Bose at his ancestral place in Medinipur, the Home Minister said the country's youth may not always get a chance to die for the nation like Bose, but they have a chance to live and follow the brave revolutionary's path.

"Those who do 'ochi rajneeti' (shallow politics), I remind them that Khudiram Bose was as much Bengal's as he was the rest of nation's. Pandit Ramprasad Bismil belong as much to UP as to Bengal. The freedom fighters would not have imagined such 'ochi rajneeti'," Mr Shah told mediapersons.

His comments were likely aimed at Trinamool's attempts to paint the BJP as a party of "outsiders" which should not be given any space in West Bengal.

The Home Minister, accompanied by Bengal BJP leader like Dilip Ghosh and the party's West Bengal in-charge, Kailash Vijayvargiya, then went on to have lunch at a farmer's house in Belijuri village in West Midnapore district. 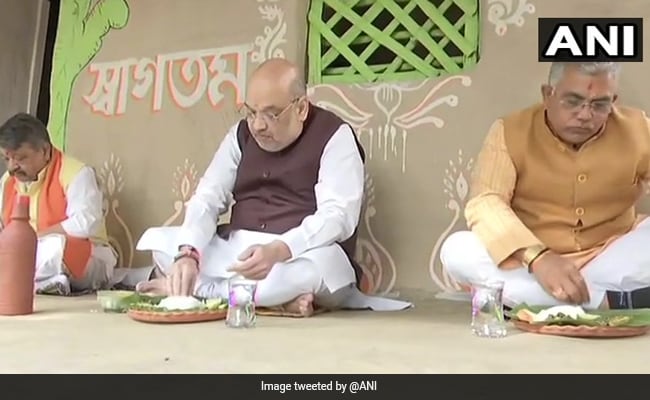 Mr Shah arrived in Medinipur a little after noon by helicopter from Kolkata. He offered prayers at the Siddheswari Kali Temple and later at the Devi Mahamaya temple in the town. 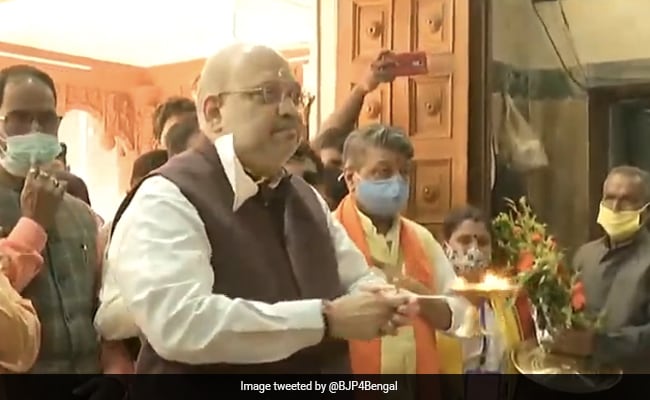 The Home Minister began his day in the state capital offering prayers to Swami Vivekananda, Shri Ramakrishna Paramahamsa, and Sarada Devi at the Ramakrishna Ashram around 10.30 am.

"Vivekananda ji connected modernity and spirituality. He had said that if, for 50 years, everyone forgot their own gods and goddesses and prayed only to Bharat Mata, this nation would become aware. Exactly 50 years after that, India won independence," Mr Shah said at the Ashram in the morning.

Mr Shah arrived in Kolkata around 1.30am.

Later in the day, Mr Shah is expected to welcome Suvendu Adhikari, the high-profile former Trinamool leader, to the BJP. Mr Adhikari first resigned from the Mamata Banerjee cabinet on November 27 and then from the party on December 16. His associates have promised a "political storm more fierce than Cyclone Amphan" to sweep across Bengal today from Darjeeling to Digha".

The former Trinamool leader may also bring along several other party leaders. Only yesterday, two MLAs resigned from Trinamool, though Jitendra Tiwari, who had quit a day earlier, returned to his mother party.

On Sunday, he will visit Viswa Bharati University in Bolpur, where he will hold a roadshow.

Mr Shah's West Bengal visit comes nine days after a convoy of BJP chief JP Nadda was attacked by alleged Trinamool workers, sparking a huge row between the Centre and the state.

Earlier, the state BJP chief, Dilip Ghosh, had said that Mr Shah and Mr Nadda would visit the state every month till the assembly elections, likely in April-May.

The BJP has been investing unprecedented amounts of time and resources in the state ahead of the polls, looking to replace the Mamata Banerjee-led Trinamool Congress from power.

Ahead of Mr Shah's visit, the party had assigned parts of West Bengal to six Union Ministers to prep for the polls. These ministers have been tasked with taking charge of campaigning in various Lok Sabha seats.