Sources said this was the first such meeting held at the residence of Mr Nadda with union ministers and party leaders since the lockdown began. 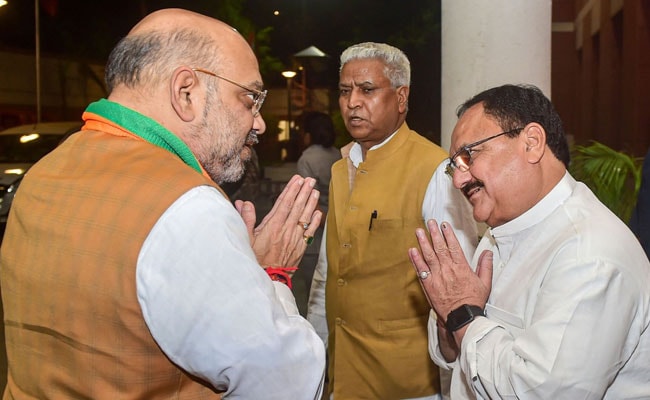 Senior ministers and BJP leaders met at party chief JP Nadda's residence on Thursday to discuss the prevailing COVID-19 situation in the country.

Union Home Minister Amit Shah was among those present at the meeting where strategies to reach out to the poor and underprivileged sections in the country were reportedly discussed.

Suggestions were also sought from the leaders on what more needs to be done to alleviate the distress during the trying times.

Sources said this was the first such meeting held at the residence of Mr Nadda with majority of union ministers and party leaders since lockdown started.

The issues discussed at length in the meeting related to migrants including centre's financial help to run shelter homes and aid provided to states to keep migrants, problems faced by them and "reluctance" of some states to allow trains bringing migrants.

The financial package to boost economy was also discussed and ministers and party leaders were asked to get their doubts clarified on the package details announced by Nirmala Sitharaman.

"Government has given money to keep shelter homes running. Also, they have permitted states to use SDRF funds for providing food and water," a source said.

Another source said that reluctance to allow trains bringing migrants too was discussed. "It is a federal structure and states have a say in many matters. Many like West Bengal and Maharashtra are not too forthcoming with allowing trains. For them bringing migrants is a problem despite the aid provided by the centre," the source said.

Another party leader said it was a meeting to give an insight into centre's schemes and implementation of the policies.

Sources said Finance Minister Nirmala Sitharaman and Commerce and Industry and Raiways Minister Piyush Goyal were present at the meeting.

The government has announced a series of steps for the poor, migrants and other sections impacted by COVID-19.