"Amit Shah Is Backstage Hero. He Has No Desire For Credit": Rajnath Singh

Releasing the book "Shabdansh", a collection of Amit Shah's speeches on a variety of issues, Rajnath Singh said the home minister combines the rare mix of politics and spirituality. 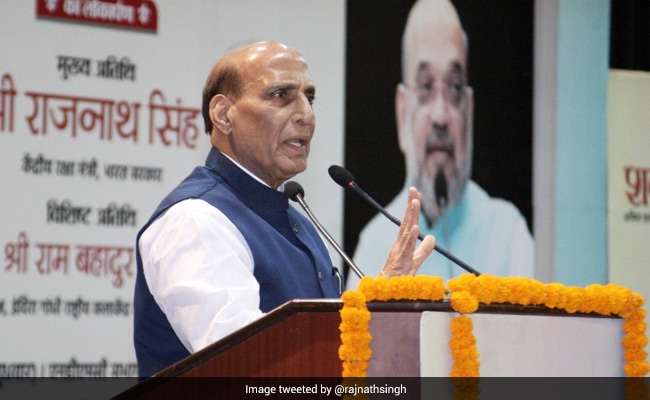 Amit Shah's life has been a laboratory and had its share of bittersweet memories, Rajnath Singh said.

Defence Minister Rajnath Singh on Wednesday described Home Minister Amit Shah as "Nepathya Ke Nayak" (backstage hero) who has worked without any desire for credit and stuck to his duties despite bittersweet experiences in life.

Releasing the book "Shabdansh", a collection of Mr Shah's speeches on a variety of issues, Mr Singh said the home minister combines the rare mix of politics and spirituality and added that the range of his study will surprise many people.

"It will not be an exaggeration to say Mr Shah is a backstage hero. He has no desire for credit. He remains in the background and does so many big works for the government and the party and still gets time to study so much," the senior BJP leader said about his colleague.

Mr Shah's life has been a laboratory and had its share of bittersweet memories, Mr Singh said, noting that the Gujarat leader had to spend several months in jail, a reference to the Sohrabuddin Sheikh fake encounter case in which he was later acquitted by the court of all charges.

Investigation agencies harassed him so much, he said, noting that Prime Minister Narendra Modi, then chief minister of Gujarat, was also targeted, a reference to the Gujarat riots case in which the SIT gave him the clean chit later.

Mr Shah had faith that truth will come out and it did, he added.

"Shah went wherever probe agencies summoned him and never raised a hue and cry or launched an agitation," Mr Singh said, in an apparent swipe at the Congress for its protests over the questioning of its leaders Sonia Gandhi and Rahul Gandhi by the Enforcement Directorate in the National Herald case.

The Congress-led United Progressive Alliance (UPA) was in power when the two BJP leaders were investigated by federal agencies.

Mr Singh said, "Every challenge made him (Shah) stronger. Without being concerned about acclaim or ignominy, he walked the path of his duties. Rarely do we get an amalgamation of politics and spirituality but it is in him." Politics is meant to put the society on the right path but the term has lost its meaning and people look at it and politicians in a negative light, he said, adding that Mr Shah is working to restore its true goal.

Mr Singh said there can be no happier experience for him than releasing the book of an "anuj" (younger brother) and urged people to read it, saying it is a significant collection of his speeches on a range of subjects from spiritual and historical personalities to Article 370 and triple talaq besides Modi.

Mr Singh said Amit Shah's speeches in Parliament on Article 370 and triple talaq were "wonderful" and even opposition members acknowledged that, though they may not admit it publicly, he said.

This book, edited by Shivanand Dwivedi and published by Rupa, will work as a "lighthouse" for the coming generations, Mr Singh said.

It is a document of changing India and is supported with appropriate contexts, he said. It describes the journey of the struggles of the country after independence, highlights its current aspirations and carries its dream for the future as well, he added.

Mr Shah does not speak much and may appear to be stern, he said, noting that such people are often misinterpreted.

Mr Singh stressed that when the home minister talks, he makes a positive contribution.

Even on complex issues, he puts across his views in a simple manner and that is the reason people understand and like what he says, the defence minister said.

His speeches carried in the book will answer the readers' questions about a host of issues, including policy-making and governance, about the country.