In a series of tweets, Amit Shah said the Prime Minister's legacy includes "strongest amendments to SC/ST Act" and setting up of the OBC Commission, while the Congress legacy was about insulting Dalit leaders, opposing the Mandal Commission report and blocking a move to empower the OBC body. 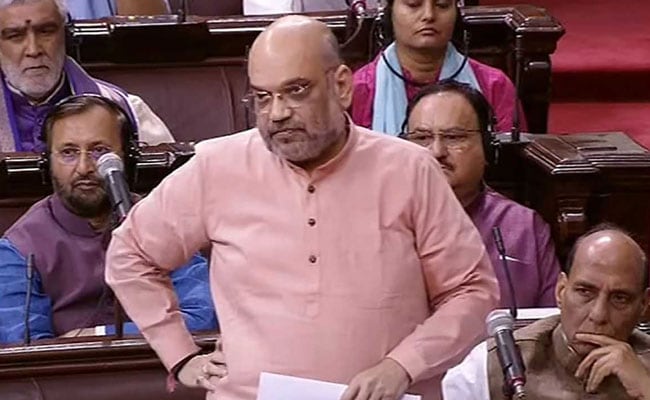 Hitting back at Rahul Gandhi for accusing Prime Minister Narendra Modi of having an "anti-Dalit" mindset, BJP president Amit Shah today asked the Congress chief to look at facts when "free from winking" and alleged it was the opposition party that had a legacy of insulting Dalits.

In a series of tweets, Mr Shah said the Prime Minister's legacy includes "strongest amendments to SC/ST Act" and setting up of the OBC Commission, while the Congress legacy was about insulting Dalit leaders, opposing the Mandal Commission report and blocking a move to empower the OBC body.

His attack at the Congress and its president came after Mr Gandhi joined a protest at Jantar Mantar and criticised PM Modi over his government's policies towards Dalits.

In a series of tweets scoffing at Mr Gandhi, Mr Shah asked him to spend some time on facts "when you are free from winking and disrupting Parliament" and asserted that the NDA government has ensured the strongest amendment to the Scheduled Castes and Scheduled Tribes (Prevention of Atrocities) Act.

Rahul Ji, when you are free from winking and disrupting Parliament, give some time to facts as well.

NDA Government, through a Cabinet decision and in Parliament ensured the strongest amendment to the Act.

Why are you protesting that? https://t.co/Ik2Jq1Krny

He was referring to Mr Gandhi's apparent wink in Lok Sabha after hugging PM Modi during a debate on the no-confidence motion against the government.

"Why are you protesting that?" Mr Shah asked Mr Gandhi while taking about the new bill that seeks to reverse a recent Supreme Court order that put additional safeguards against arrest of accused in cases of atrocities against Dalits.

Earlier in the day, Mr Gandhi had said the Congress government had brought the atrocities act and his party will protect it together with everybody.

Alleging that Dalits are being openly beaten and crushed in states where the BJP is in power, Mr Gandhi said the Prime Minister's "thinking is anti-Dalit".

"All Dalits and people from the weaker sections know that the Prime Minister has no place for Dalits in his heart and mind and wants to crush Dalits. That is why we are standing against him," he had said.

Would have been good if Congress President would have spoken about his Party's treatment towards Dr. Babasaheb Ambedkar, Babu Jagjivan Ram and Sitaram Kesari.

Attacking Mr Gandhi, Mr Shah said it would have been good if the Congress leader had spoken about his party's treatment of Bhim Rao Ambedkar, Babu Jagjivan Ram and Sitaram Kesari.

He asked whether it was a co-incidence that the year Sonia Gandhi joined the Congress, the third front-Congress government opposed reservations in promotions and the year Rahul Gandhi became the party president, it opposed a tough SC/ SCT Act and the OBC Commission. "Anti-backward mindset visible," Mr Shah tweeted.

"Mr Rahul Gandhi, expecting research and honesty is difficult from you but do read Mr Rajiv Gandhi's speech during Mandal (row), when he opposed it (its recommendations) tooth & nail. The sense of entitlement and hatred for backward communities comes out so clearly. And today you talk about Dalit welfare!" he said.

Mr Shah further said the Modi government has developed a 'panchteerth' -- a reference to five places associated with the life of BR Ambedkar, while the Congress insulted Dalit leaders and pride.