The Amul model is an example of what one can achieve when 36 lakh people work together, Amit Shah said. 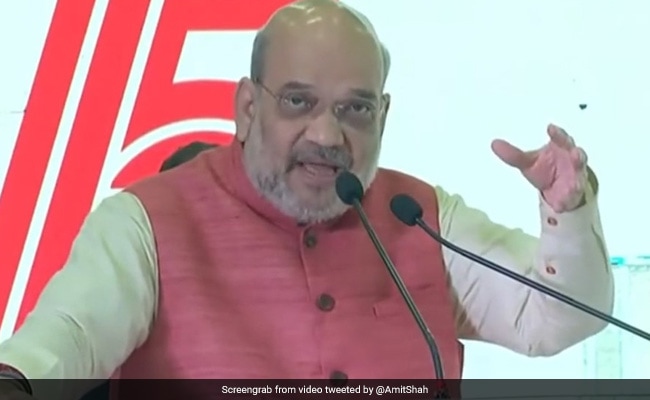 The cooperative model is the only model of economic development which will work to achieve an all-encompassing and all-inclusive development of a huge country like India with a population of 130 crore, Union Cooperation Minister Amit Shah said on Sunday.

Addressing a gathering here after inaugurating a milk powder factory, a poly film manufacturing plant and other projects of the Gujarat Cooperative Milk Marketing Federation (GCMMF) set up with an investment of Rs 415 crore, Mr Shah said the cooperative model has the capacity to make everyone prosperous, and there is a need to increase the number of successful cooperative models (like Amul) and bring them under one umbrella.

He also suggested Amul to work out a similar model for organic farming so as to encourage more farmers to adopt the practice, as fertilisers were causing soil degradation and diseases like cancer.

Mr Shah said Prime Minister Narendra Modi had recognised cooperative as the best economic model for the country having a population of 130 crore when he was the chief minister of Gujarat.

"It is a very difficult job to take development to all and make everyone participate in the process of development in a country with a population of 130 crore," Mr Shah said, adding many pundits failed to figure out which economic model will fit the requirements of this country.

"But, 75 years after the country saw many rules, the country's prime minister (Modi) tested the model and had realised as the then chief minister of Gujarat, that if there is any economic model for an all-encompassing, all-inclusive economic development of a country of 130 crore population, then that is only the cooperative," he said.

Mr Shah said he believes the field of cooperation has the capacity to make everyone prosper.

"Cooperative is the only field which has the capacity to give a new pace to the economy, and make all prosperous, and Amul is a living example of this. Amul is an example of what 36 lakh women (dairy farmers) can achieve if they work together with transparency," he said.

He said it is impossible to fulfill India's milk requirement without Amul. The fact that Amul is expanding beyond Gujarat is a welcome step, as dairy farmers from other states also need to get the right price for their produce, he added.

Mr Shah also suggested the Amul authorities to develop a model to ensure farmers adopting organic and natural farm practices get better prices for their produce and encourage others for the same. He said the Centre will support such an endeavour.

He said the country is facing a very big crisis due to the degradation of soil quality, decrease in production and health hazards caused by the use of fertilisers, and more and more farmers will have to move towards organic farming practices.

Many progressive farmers have already switched over to organic or natural farming, he said, adding that more than two lakh farmers in Gujarat have adopted natural farming techniques which have yielded positive results.

But, such farmers are not getting the right amount for their organic produce, even when there are systems in the world where they can get a much better price, he said.

If the trust of consumers is won through adoption of infrastructure for organic products and development of scientific techniques and testing facilities, then organic farming will grow, Mr Shah said.

The new milk powder plant set up at AmulFed Dairy, a unit of the GCMMF, is Asia's largest fully automated dairy having milk handling capacity of 50 lakh litres per day, the GCMMF claimed in a release.

The Amul group has 87 dairy manufacturing plants with a handling capacity of 39 million litres of milk per day, it said.

Besides its extensive network in Gujarat, the group also sources milk from 13 other states. Some of its member unions have also set up village-level dairy cooperage societies in West Bengal, Maharashtra, Haryana, Rajasthan, Punjab, Andhra Pradesh, Telangana, and Uttar Pradesh, the release said.