Notably, Haryana had recorded the highest daily spike in over four months on Thursday as 2,872 more people had tested positive for coronavirus, the Health Department said. 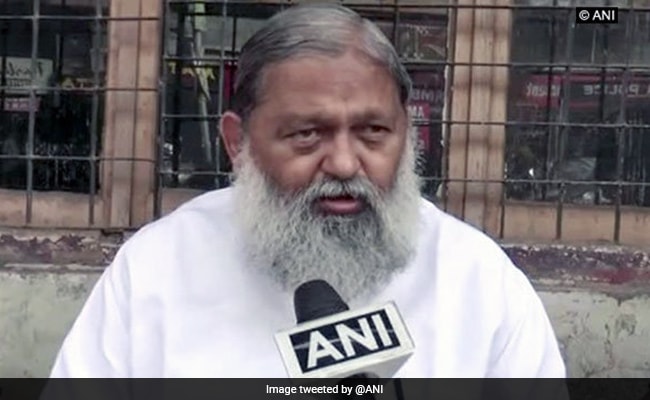 Anil Vij said all required steps are being taken to check spread of virus in the state. (File)

With Haryana witnessing a surge in COVID-19 cases, Home Minister Anil Vij on Friday said he was concerned about the farmers sitting on the state's borders with Delhi and would be writing to the Union Agriculture Minister for resuming talks and solve the issue.

Mr Vij, who is also the Health Minister, said all required steps are being taken to check the spread of coronavirus in the state.

"We are doing all that...but my concern is that a large number of farmers are sitting along Haryana's borders. Coronavirus cases are spreading fast and I have to save them too from corona."

"I am going to write to the Union Agriculture Minister to resume talks soon so that this issue is resolved and farmers who are sitting in large numbers can go back home. A solution to any problem can be found only through dialogue," Mr Vij told reporters in Ambala.

Notably, Haryana had recorded the highest daily spike in over four months on Thursday as 2,872 more people had tested positive for coronavirus, the Health Department said.

Thousands of farmers, mostly from Punjab, Haryana and western Uttar Pradesh, have been camping at three border points of Delhi -- Singhu, Tikri (along Haryana), and Ghazipur -- demanding a repeal of the three farm laws enacted by the Centre in September last year.

The Centre says the new farm laws will free farmers from middlemen, giving them more options to sell their crops.

The protesting farmers, however, say the laws will weaken the minimum support price (MSP) system and leave them at the mercy of big corporates.