"Will Be A Strong Message": Only 11 Guests For Jharkhand MLA's Wedding Amid Covid

For Naman Bixal Kongari, who took the solemn wedding vows in Ranchi Thursday, this was to show to send a message to the masses. 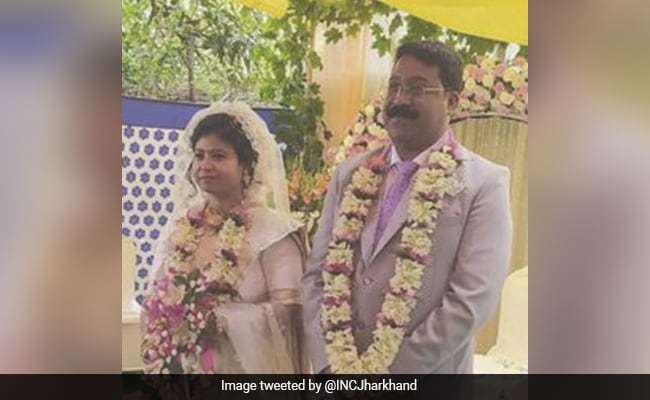 At a time when wedding bells have stopped chiming amid exponential surge in COVID-19 cases during the deadly second wave, this Jharkhand legislator chose it an opportune moment to tie the nuptial knot.

For Naman Bixal Kongari, who took the solemn wedding vows in Ranchi Thursday, this was to show the rural masses that marriage can be conducted with such simplicity within the confines of one's home without any fanfare.

The restrictions enforced by the Jharkhand government to rein in coronavirus surge make it clear that not more than 11 persons shall attend the marriage, including the bride/bridegroom.

It has prohibited the use of loudspeakers, DJ, firecrackers etc and has made it mandatory to provide information regarding weddings at the nearest police station at least three days prior to wedding.

The 48-year-old MLA said the event was held after due permissions by a pastor from Church at home and only five people were there from the bridegroom's side- his daughter, two sisters, a witness and a friend.

Bride Madhu had six guests from her side and it was all a simple affair, he told PTI.

He says he chose to drive to Ranchi to bride's place at Dibdih to solemnise his wedding.

Unique was that his daughter Archie (15) was a witness to the pious bond ceremony.

This is the second wedding for the MLA who lost his first wife.

"During a meeting of MPs and MLAs with the Chief Minister Hemant Soren recently to chalk out a strategy to contain the surge of the virus, many were of the view that marriages should not be allowed during these times.

"But the people in remote and far-flung areas of Jharkhand do not follow such restrictions and it was decided to allow weddings with restrictions," Mr Kongari, who got elected from Kolebira (ST) constituency in 2019 on a Congress ticket, said.

He said many whether Hindu, Muslim, Christian or any other community think it inauspicious to extend the dates for weddings once finalised.

"Under the circumstances, I chose to go for it on a given date, which is today, with a message to the masses, especially the rural masses.

"I wanted to show them that when a person who has resources and can afford it in a lavish manner later, can solemnise weddings with such simplicity, why can't they...And I think this will be a strong message for people in rural areas," he said.

Battling severe surge in cases, Jharkhand which has announced lockdown-like restrictions till May 27 has reduced the number of people attending weddings to 11.