The editorial in ''Saamana'' alleged that the previous state government "covered up" Anvay Naik's suicide case to protect Arnab Goswami. 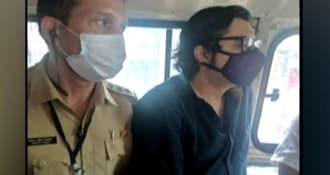 Arnab Goswami was arrested from his home in Mumbai.

The Shiv Sena today slammed the BJP for describing the arrest of Republic TV editor-in-chief Arnab Goswami in an abetment to suicide case as "black day" and an "attack on the freedom of press".

An editorial in Sena mouthpiece ''Saamana'' said it was surprising that central ministers along with state BJP leaders should say there was an "Emergency-like situation" in Maharashtra due to Mr Goswami's arrest.

Mr Goswami was arrested by police on Wednesday from his home in Mumbai for allegedly abetting the suicide of interior designer Anvay Naik.

Mr Goswami and two others were booked under charges of abetment of suicide and common intention in connection with the suicide of Mr Naik and the latter's mother over alleged non-payment of dues by Republic TV.

The editorial in ''Saamana'' alleged that the previous state government "covered up" Mr Naik's suicide case to protect Mr Goswami.

It further claimed that a journalist was arrested in Gujarat for writing against the state government, while in Uttar Pradesh, journalists have been killed.

"Nobody felt these incidents were reminders of the Emergency. In fact, the state BJP leaders should demand justice for Anvay Naik, a son of the soil," the editorial said.

"An innocent man died by suicide along with his aged mother. The dead man's wife is demanding justice and the police are following the law," it said.

"Where is the question of the fourth pillar (of democracy) being attacked? Those who are saying this are attempting to trample the first pillar," the editorial said.

Everyone including prime ministers are equal before the law of the land, it said.