A social reformer, economist and jurist, BR Ambedkar was the force behind the Dalit Buddhist Movement in India. 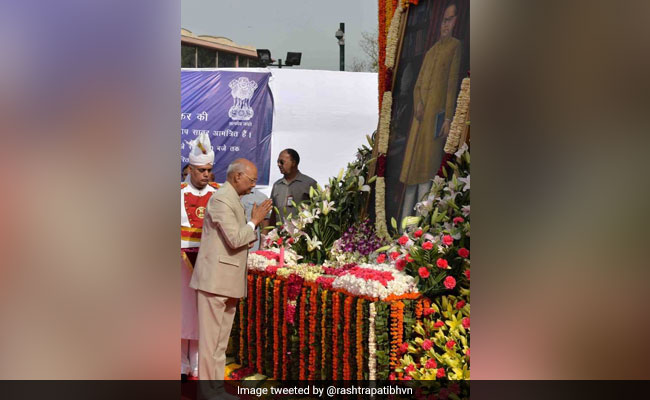 "I pay my homage to the chief architect of Indian Constitution and a person who has worked for social justice - Dr Bhimrao Ambedkar -on his birth anniversary. Jai Hind!" Prime Minister Modi tweeted in Hindi along with a video.

Dr BR Ambedkar played a key role in the formation of Reserve Bank of India - the country's central banking institution.

"Homage to Dr B.R. Ambedkar on his birth anniversary. An icon of our nation, and Chief Architect of the Constitution, Dr Ambedkar waged a life-long struggle for a modern India free of caste and other prejudices, ensuring equal rights for women and weaker sections," President Kovind tweeted on Ambedkar Jayanti, after which he paid floral tributes at Parliament House Lawns in New Delhi.

Congress chief Rahul Gandhi also took to Twitter to remember Babasaheb on Ambedkar Jayanti, who dedicated his life to working for the upliftment of untouchables, women, and labourers.

"On Dr Babasaheb Ambedkar's jayanti, let us re-dedicate ourselves to the 4 universal values of JUSTICE, LIBERTY, EQUALITY & FRATERNITY enshrined in our Constitution. Those who pay him tributes on this day, while insidiously weakening these values, do his memory disservice," Mr Gandhi said.

Bahujan Samaj Party leader Mayawati on Ambedkar Jayanti said that by giving a priceless constitutional right of one person-one vote, and the same value for each vote, Baba Saheb sought the mastery key for the upliftment and welfare of Dalits, oppressed, backward and religious minorities. "We have to fulfill that."

In 1956, BR Ambedkar steered a socio-political movement called the Dalit Buddhist Movement in India which was joined by nearly half a million Dalits. The movement later got converted to Navayana Buddhism or Neo-Buddhism, a re-interpretation of Buddhism.

CPI(M) general secretary Sitaram Yechury tweeted: "On the birth anniversary of Dr BR Ambedkar: We must strengthen our resolve to ensure that one person has one value..."

We must push onwards to realise the promise our Constitution makes to each citizen, irrespective of who they are, what they eat, who they worship or don't, and who they marry. (2/2)#Justice#Dignity#OnePersonOneValue#DrBRAmbedkarhttps://t.co/foEMzzxKLT

Home Minister Rajnath Singh on Ambedkar Jayanti tweeted: "I bow to Babasaheb Bhimrao Ambedkar on his Jayanti today. Babasaheb's vision for the uplift of the poor and downtrodden inspires us to work for the welfare and  empowerment of weaker sections. The nation will remain indebted to Babasaheb for his immense contribution."

I bow down in reverence of Bharat Ratna Babasaheb Dr. B R Ambedkar, an apostle of equality & freedom, and whose work left an indelible mark on making of New India.

I draw supreme inspiration from your ideals, which constantly guide me to work for welfare & dignity of our people.