Amazon, Flipkart Want To Use Electric Vehicles in India. Except...

Cheaper running costs, plus the opportunity to burnish their green credentials in India's polluted and noisy cities, also make EVs an attractive option. Electric vehicles account for less than 1% of India's annual car sales, compared to about 6% in China.

Sourabh Saini, a delivery driver for Indian online supermarket BigBasket, is thrilled by the attention he gets as he zips around Noida, a satellite city on the outskirts of Delhi, in his three-wheeled electric van.

"I like how my electric van always gets noticed," said Saini, who made the switch from fossil fuels about eight months ago as part of BigBasket's push to electrify 90% of its fleet. "Customers are surprised at how silent it is. They get curious about my experience of driving an EV and start asking about its price and range."

That makes him somewhat of a novelty in India, where BigBasket and online giants Amazon.com Inc. and Flipkart -- who could hold the key to getting more gas-guzzlers off India's roads -- are struggling to source enough vehicles to meet ambitious targets to electrify their delivery fleets.

"It's not plug and play," said Mahesh Pratap Singh, head of sustainability and responsibility at Flipkart. "When we scanned the landscape there wasn't much from a supply and reliability perspective, or a viable commercial option out there. That led us to believe you've got to put one big bold ambition out there and really nudge the entire ecosystem and shape it, rather than just being a consumer."

The nature of online delivery operations -- quick trips from a central hub where a standard charging solution can be installed -- is well suited to EV adoption, overcoming the range anxiety and shortage of charging infrastructure that has proven a roadblock to general take-up. Electric vehicles account for less than 1% of India's annual car sales, compared to about 6% in China. 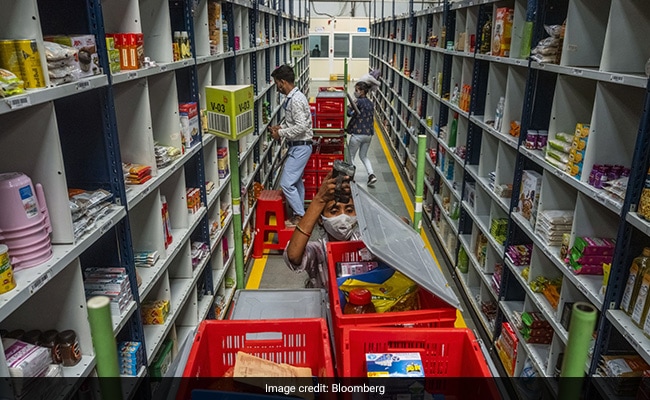 Fufilling orders at a BigBasket warehouse in Noida.

Cheaper running costs, plus the opportunity to burnish their green credentials in India's polluted and noisy cities, also make EVs an attractive option. "It does make economic sense," said Flipkart's Singh. While the upfront cost of an EV might be higher, "monthly running costs are lower since your maintenance cost is lower. The dynamics start to change as the scale comes in."

But India's delivery giants are finding there aren't many models available that can be deployed at scale, and what supply there is can't keep up with demand. Maruti Suzuki India Ltd., the nation's biggest automaker, doesn't make any electric-powered cars, having said the cost of an EV puts them beyond most buyers.

That leaves Amazon, Flipkart and BigBasket mostly relying on Mahindra & Mahindra Ltd.'s Treo Zor, a three-wheeled van that costs 273,000 rupees ($3,670) and has sold about 1,000 units in the five months since deliveries started in November. Mahindra produces about 400 Treo Zor vans a month. Preparing customers' orders for delivery at a Bigbasket warehouse.

Amazon aims to have 10,000 EVs delivering parcels in India by 2025, while Walmart Inc.'s Flipkart has said it will deploy more than 25,000 EVs and be fully electric by 2030. BigBasket, a unit of Tata Group, has pledged to meet its 90% EV target within three years. Flipkart and Amazon have both tied up with Mahindra Electric Mobility Ltd. for three-wheelers and Hero Electric Vehicles Pvt. for scooters.

To be sure, electrification of delivery fleets is taking time in North America as well. Amazon has ordered 100,000 electric vans from start-up Rivian Automotive Inc., which last month pushed back the production of its debut vehicle because of supply-chain bottlenecks. 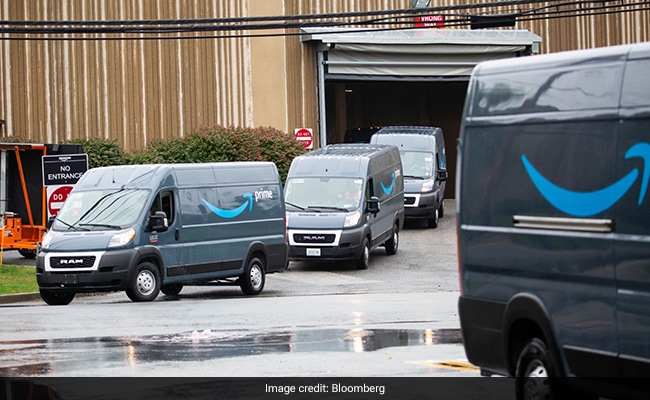 Walmart Canada is seeking to convert 20% of its fleet to electric vehicles by the end of 2022 and has reserved 130 Tesla Inc.'s Semi trucks, which haven't started production yet.

When BigBasket began an EV test run in 2017, the swappable batteries weren't totally waterproof and some caught fire in accidents. The vehicles sometimes ran out of charge and had to be towed back to the depot, and the low-slung battery packs often became submerged in water-filled potholes during monsoons. 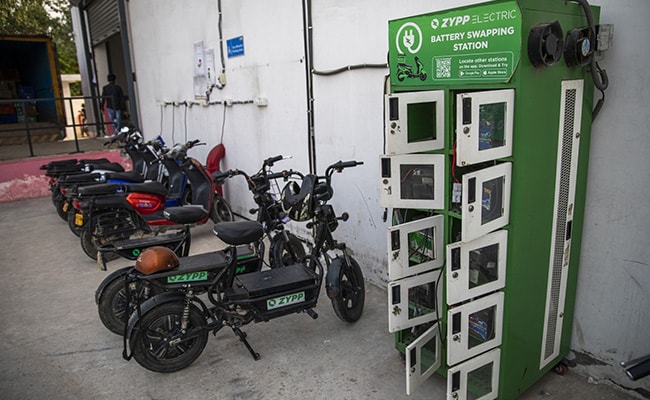 Electric Scooters at a battery swapping station in the BigBasket warehouse.

BigBasket worked with automakers to produce fireproof and waterproof swappable batteries that are robust and durable across harsh working environments and the vehicles are now equipped with devices to track how much charge is left, said KB Nagaraju, Chief Customer Officer at BigBasket.

Financing and a lack of incentives are also hampering the electrification of the delivery fleets. Unsure about the new technology and the resale value of EVs in the event of loan defaults, banks are reluctant to lend, and if they do they charge higher interest rates, said BigBasket's Nagaraju.

"Subsidies available currently are still inadequate to bridge the price gap between an average internal combustion vehicle used in commercial fleets and a comparable EV," said Allen Tom Abraham, an analyst at BloombergNEF. "In India, even though there are very ambitious federal and state-level targets for EV deployment, sales of electric buses, taxis and light-trucks are yet to take off." 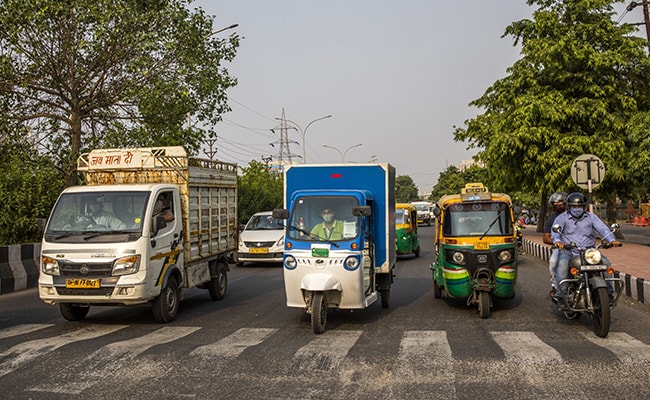 Saurav Saini waits as a pedestrian crossing while on deliveries in Noida.

Despite the roadblocks, Saini, the delivery driver, is a convert.

"Our future is electric vehicles," he said. "All e-commerce companies, big or small, should use EVs because they're economical and environmentally friendly. They're very low maintenance compared to diesel and petrol cars, which is why they're cheaper for us."