Amarnath Yatra Resumes In Jammu And Kashmir After Improvement In Weather

As the water level in the Jhelum river started receding, the authorities decided to allow the pilgrims from the Bhagwati Nagar base camp to join the yatra. 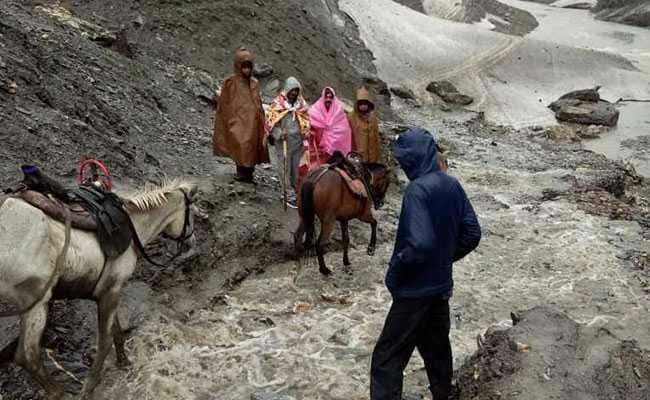 The annual pilgrimage to the cave shrine of Amarnath in south Kashmir Himalayas resumed on Pahalgam and Baltal routes this morning after being suspended yesterday due to inclement weather, officials said.

Also the fourth batch of 6,877 pilgrims left the Bhagwati Nagar base camp in Jammu for the twin camps in Kashmir after the yatra from the winter capital of the state was allowed to resume following restoration of traffic on the Jammu-Srinagar Highway.

Traffic on the highway was suspended yesterday as a precautionary measure due to threat of floods in the Valley.

As the water level in the Jhelum river started receding, the authorities decided to allow the pilgrims from the Bhagwati Nagar base camp to join the yatra.

In Srinagar, a spokesperson of the Shri Amarnath Shrine Board (SASB) said, "Yatra resumed on both routes (Pahalgam and Baltal) this morning."

Pilgrims were allowed to resume their onward journey on foot on both the routes from the respective base camps - Pahalgam in Anantnag district and Baltal in Ganderbal district after improvement in weather and in the condition of the tracks, he told PTI.

Yesterday, the yatra was suspended on both routes due to landslides and slippery road conditions and only 587 pilgrims paid obeisance at the holy cave using helicopter services.

Despite incessant rains, the pilgrimage to the 3,880 metre-high cave shrine of Amarnath in south Kashmir Himalayas commenced on June 28 after several hours of delay, but faced frequent disruptions owing to continuous rainfall.

The 60-day yatra is scheduled to conclude on August 26 coinciding with the 'Raksha Bandhan' festival.