Syed Abid Shah, Srinagar Deputy Commissioner told ANI that in view of the inclement Jammu weather and as a precautionary measure all schools in the Kashmir division will remain closed today. A flood alert has also been sounded after the Jhelum River overflowed. 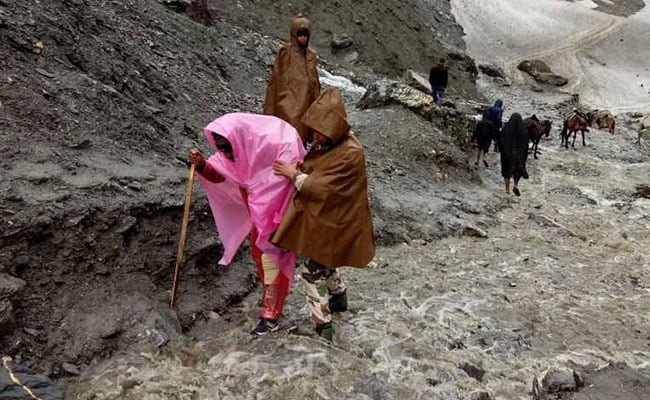 The water level in Jhelum at Ram Munshi Bagh in the city was 13.34 feet at 6pm yesterday

In view of the critical flood situation in Jammu and Kashmir, as a precautionary measure, all schools in the Kashmir division will remain closed today, Srinagar Deputy Commissioner told news agency ANI.  Amarnath Yatra had also been suspended from the Pahalgam route due to multiple landslides triggered by heavy rains and bad weather. This comes a day after the yatra was also suspended from the Baltal route because of the challenging Jammu and Kashmir weather. As the weather conditions have got better, the yatra has resumed from both locations. A flood alert has also been sounded after the Jhelum River flowed above the critical 21-feet mark at Sangam in south Kashmir's Anantnag district on Friday.

Here are the Live Updates of the flood situation in Jammu and Kashmir:

Jun 30, 2018 14:06 (IST)
Six people were stranded in Tawi river yesterday who were rescued by the State Disaster Response Force and Jammu Civil Defence teams yesterday. The river is flowing above danger mark following incessant rain in the region. 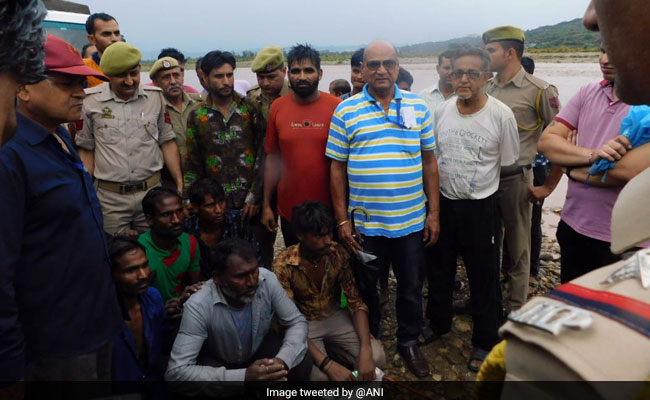 Jun 30, 2018 13:05 (IST)
Amarnath Yatra has resumed from both Pahalgam and Baltal after improvement in weather. Air sorties by administration have also resumed from Baltal, news agency ANI reported.
Jun 30, 2018 11:42 (IST)
Mehbooba Mufti had on June 28 wishing the Amarnath pilgrims a "fulfilling pilgrimage".
Jun 30, 2018 12:57 (IST)
In south Kashmir after the water level crossed the flood declaration level of 21 feet at Sangam in Anantnag district of south Kashmir. following which the flood alert was sounded. While the water level at Sangam at 10 am this morning was 23.06 feet - still above the critical mark - the water has started receding there. At 9 am the water level there was 23.16 feet. Deputy Commissioner Srinagar, Syed Abid Rasheed Shah said the people living in low-lying areas and embankments of river Jhelum in Srinagar were requested to be alert and prepared for evacuation.

What was the PDP-BJP government doing after the devastating floods of 2014? What happened to the dredging of the Jehlum? Why was the carrying capacity of the flood channel not increased? Where did the money go? https://t.co/BkCqsXe6kD

An official of the Met Department said south Kashmir's Kokernag, in Anantnag district, received the highest rainfall of 63.4 mm till 8:30 am yesterday morning, while the neighbouring Qazigund received 58.6 mm of rainfall.

Srinagar - the summer capital of Jammu and Kashmir - recorded 12.6 mm rainfall till 8:30 am yesterday but the intensity increased after that, the official said.

Pahalgam received 27.8 mm of rains. The rainfall has led to an increase in the water level in streams and rivers across the valley especially in south Kashmir, news agency PTI reported.

The water level was sharply increasing since yesterday morning, as there has been an increase of around one foot with each hour since 9 am. The fast rising water levels has induced fear among the valley residents of a re-run of 2014 floods that caused widespread devastation and left over 300 persons dead.

Jun 30, 2018 11:19 (IST)
The water level in Jhelum at Ram Munshi Bagh in the city was 13.34 feet at 6 pm yesterday, over 4.5 feet below the flood declaration level. An official of the Irrigation and Flood Control Department said the people living in areas along the embankments of River Jhelum, other streams and in low lying areas were advised to remain vigilant. 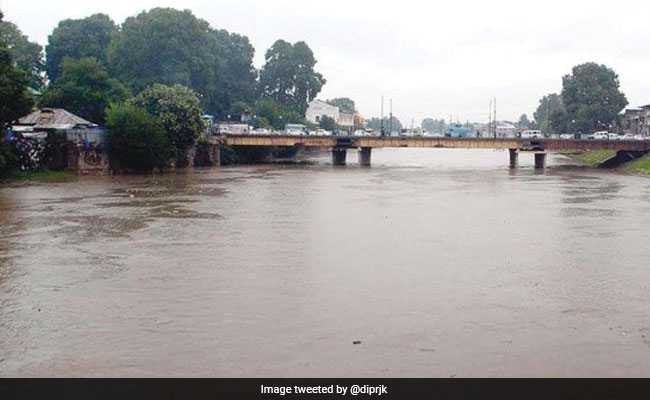 Jun 30, 2018 10:26 (IST)
Officials have also issued an alert as the Darhali River in Rajouri overflowed on Friday due to heavy rainfall.
Jun 30, 2018 10:26 (IST)
Jammu and Kashmir Governor N N Vohra has called for an emergency meeting to discuss the flood-like situation in the state.
Jun 30, 2018 09:02 (IST)
"Due to slippery trek routes and bad weather, no Yatri was allowed to move towards the Cave Shrine from either base camp." officials said. 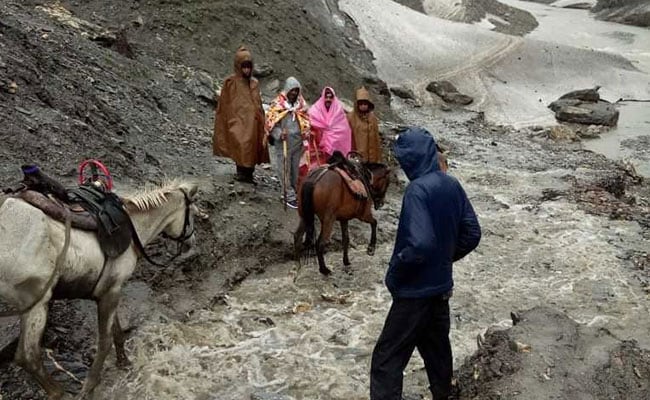 They added that the situation will be reviewed once the weather improves and that all pilgrims were safely lodged inside the two base camps.
Sonam Lotus, Director of the MET department, said the weather would improve towards the afternoon.

Jun 30, 2018 09:01 (IST)
The 60-day annual pilgrimage was scheduled to start from Pahalgam in Anantnag district and Baltal in Ganderbal district Thursday morning. Over two lakh pilgrims have registered for the annual pilgrimage to the 3,880 metre high cave shrine of Amarnath in south Kashmir Himalayas. The yatra is scheduled to conclude on August 26 coinciding with the 'Raksha Bandhan' festival. Last year, over 2.6 lakh people registered for the annual pilgrimage.
Jun 30, 2018 08:56 (IST)
Security has been heightened to avoid any untoward incident. "Our personnel are patrolling 24x7. We've also got special dog squad to help us detect suspicious objects and we have also started a helpline, senior superintendent of police, railways, told yesterday.
Jun 30, 2018 08:53 (IST)
Heavy rains in Banihal-Udhampur sector had also triggered landslides and shooting of stones at four places at Panthal, Nedgard, Digdol and Samroli yesterday morning, blocking the highway, the officials said.
Jun 30, 2018 08:50 (IST)
On Friday, a landslide at Gangroo near Ramsu along the 260-km long Jammu-Srinagar national highway - the only all-weather road connecting Kashmir with rest of the country, left hundreds of vehicles, including the convoy carrying Amarnath pilgrims, stranded. The Amarnath pilgrims had reached Makarkoot when the landslide struck.
Jun 30, 2018 08:49 (IST)
The third batch of pilgrims who began their yatra from Bhagwati Nagar base camp and undertook the journey via Pahalgam route was stopped at Tikri base camp due to landslides triggered by heavy rainfall, reports news agency ANI.

Owing to bad weather conditions and flood alert, the yatra was stopped as a precautionary measure. The pilgrims were housed in a big hall at Trikri base camp and were also served food. 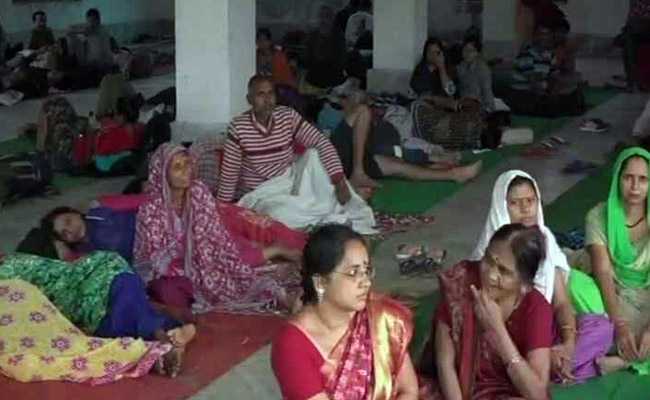 Jun 30, 2018 08:43 (IST)
"Due to inclement weather and bad condition of the roads both in Baltal and Pahalgam routes. Amarnath Yatra will remain suspended today," Jammu Police Control Room said.

Jun 30, 2018 08:42 (IST)
Authorities had yesterday sounded a flood alert as the Jhelum river flowed above the critical 21 feet mark at Sangam in south Kashmir's Anantnag district due to heavy rains over the past two days.
Kashmir Flood AlertKashmir SchoolsAmarnath Yatra

Migrants Will Have To Register Themselves On Return: Maharashtra Minister