"Am I Vijay Mallya": Sena's Sanjay Raut After Seizure Of Property

Sanjay Raut said pressure is being created on him to bring down the Maharashtra government. "That I'll have to face the Central investigation agencies otherwise... They came to this house and threatened me. Then the action started," he added. 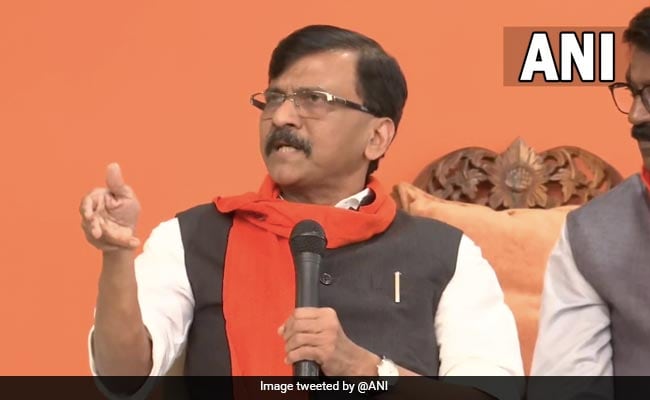 Sanjay Raut said, "They came to this house and threatened me".

Shiv Sena's Sanjay Raut, furious over the Enforcement Directorate's move to attach his properties in connection with the Rs 1,034 crore Patra Chawl land scam case, today mocked the agency, questioning if they considered him equal to fugitive tycoons like Vijay Mallya and Nirav Modi. The action against him, he said, started after people pressured him to bring down the Maharashtra government.

Asserting that this has been going on for two years, Mr Raut told the media today that he had already informed the Rajya Sabha chairman -- Vice President Venkaiah Naidu -- about the matter.

"If this is a matter of political revenge, I intimated the Rajya Sabha chairman earlier about this. That pressure is being put on me to bring down the Maharashtra government. That I'll have to face the Central investigation agencies otherwise," he said. "They came to this house and threatened me. Then the action started," he added.

Earlier, Mr Raut had claimed that in January, he was contacted by "some senior BJP leaders" who asked him to switch sides and warned he would have to pay a price if he refused. He was told that central agencies will "fix" him if he did not budge. "We want to topple this government anyhow. We will either get President's Rule imposed or we will break a group of MLAs and form the government," he quoted them as saying.

The properties attached by the Enforcement Directorate today include Mr Raut's Alibaug plot and one flat in Dadar, Mumbai.

"Please understand the meaning of the word "property"," Mr Raut told reporters today. "Am I Vijay Mallya? Am I Mehul Choksi? Am I Nirav Modi or Ambani Adani? I live in a small house. In my native place, I don't have a single acre of land... whatever I have is my hard earned money. Does the investigation agency feel there is any money laundering? Whom are you linking me with?" he said.

They can't scare me. Whether they seize what they call my property or shoot me or send me to jail...  Sanjay Raut is Balasaheb Thackeray's follower and a Shiv Sainik," he added.

Earlier raids were conducted on Mr Raut's properties. The Sena leader also claimed that the ED was interrogating people who were involved in his daughter's wedding -- including the florist, decorator, the beautician and even his tailor.

Mr Raut is among of the several Sena leaders, who or their relatives or aides, have come under the scanner of investigative agencies over the last months.

In March, Chief Minister Uddhav Thackeray's brother-in-law's assets worth Rs 6.45 crore were frozen by the Enforcement Directorate in a money laundering case.

The coalition government in Maharashtra has claimed that all states that don't have BJP governments are facing such action.