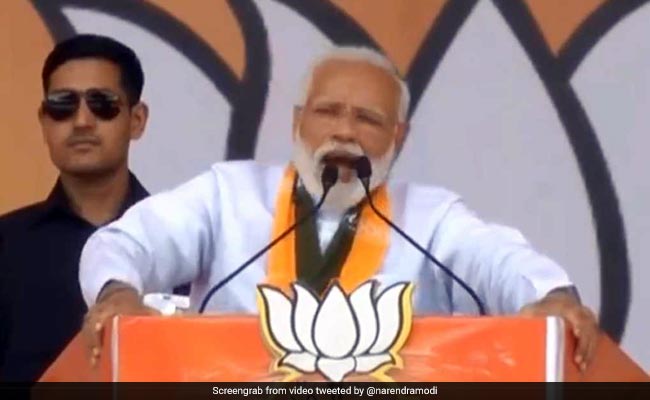 Prime Minister Narendra Modi today accused the Congress government in Rajasthan of suppressing news of the April 26 gang-rape a Dalit woman in Alwar to benefit the party during polling for the 2019 Lok Sabha election.

The Prime Minister also claimed the Congress, which won the state from the BJP in the 2018 Assembly election, could not give "nyay (justice)" to rape victims across the country. PM Modi's use of the word "nyay" was a subtle reference to the Congress' flagship welfare program for this election - a minimum income support scheme for farmers called NYAY or Nyuntam Aay Yojana.

Addressing an election rally in Ghazipur in Uttar Pradesh, he said, "A Dalit girl was gang-raped by thugs. Instead of catching the accused the Congress government is trying to bury the case. This happened because there were elections in the state then. They delayed justice. This is the truth of Congress' nyay."

The Prime Minister's comments were similar to criticisms levied by Bahujan Samaj Party chief Mayawati, marking a rare moment when the two rivals agreed on something.

PM Modi and Mayawati have been frequent critics of the other this election season, with Prime Minister in April attacking the "casteist" SP-BSP alliance and Mayawati mocking him for the language used; she claimed it showed the BJP realised a "definite loss in polls" and was "frustrated".

PM Modi has also engaged in a fierce war of words with Congress President Rahul Gandhi in recent days.

Mayawati, for her part, may have called on the SP-BSP alliance to support Mr Gandhi and Sonia Gandhi in their Lok Sabha constituencies, but her distrust of the Congress remains and was most recently evident in her threat to pull support from the party's government in Madhya Pradesh.

On April 26, the Dalit woman was riding pillion on a motorcycle with her husband when the accused, who were on two bikes, waylaid them and took them to a field. They allegedly thrashed the husband and raped the woman in front of him.

The woman informed authorities of the crime on April 30 but the police failed to act till May 7, leading her husband to claim they did so because of the election; the state voted across two phases - April 29 and May 6 - of the ongoing general election.

Five people have been arrested in connection with the crime and Chief Minister Ashok Gehlot has promised a quick trial.

Ghazipur, where the Prime Minister was speaking, votes on May 19 in the last of seven phases of this general election. Final results will be declared on May 23.