Karnataka Chief Minister Siddaramaiah said Mr Yeddyurappa - the chief minister of the BJP's only government in the south in 2008 - was actually desperate because "Amit Shah, Modi, everybody knows BJP will not win". 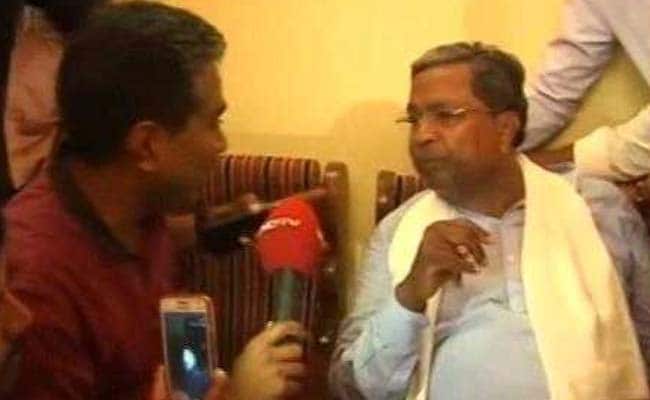 Bengaluru: Karnataka Chief Minister Siddaramaiah, fighting to retain a state where no party has been re-elected for a second straight term in 33 years, described his chief rival BS Yeddyurappa as "mentally disturbed" for announcing a date for his swearing-in even before the election. He also said there was "no doubt" that the Congress would return to power with over 120 seats in the 224-member Karnataka assembly when the results were declared on Tuesday.

Asked to react to Mr Yeddyurappa declaring he would be sworn in on May 17, Mr Siddaramaiah quipped: "He is mentally disturbed."

The 69-year-old explained: "Even before election he has declared that he will take oath on this day...it looks like he is mentally disturbed."

Mr Yeddyurappa, the presumptive chief minister of the BJP, had said this morning, "I will fly to Delhi on the 15th once the results are announced and meet Prime Minister (Narendra) Modi. I will invite him and others for the swearing in ceremony which is going to happen most likely on the 17th."

The Chief Minister said Mr Yeddyurappa - the chief minister of the BJP's only government in the south in 2008 - was actually desperate because "Amit Shah, Modi, everybody knows BJP will not win."

That the Prime Minister was visiting temples in Nepal today also showed that the BJP was nervous, he said. "You see, it shows Modi came to know BJP is going to be defeated. I also go to the temple, but everyday I don't go and (make a show of it)."

Mr Siddaramaiah denied that he was struggling in both his seats after vacating his own constituency Varuna for his son. "In Badami, I will win with big margin. In Chamundeshwari also, I will win. I will win both constituencies," he claimed.

Promoted
Listen to the latest songs, only on JioSaavn.com
He also stressed that there is "no Modi wave".

He told NDTV: "Our party is not at all nervous. All leaders including Rahul Gandhi are very, very confident. There is a wave in favor of the Congress party."

"Film Industry Has To Pay Price For Being High Profile": Javed Akhtar