All Countries Participating In Yoga Day This Year: Minister

The Minister also said the main International Yoga Day event would be held in Lucknow and attended by over 51,000 yoga enthusiasts 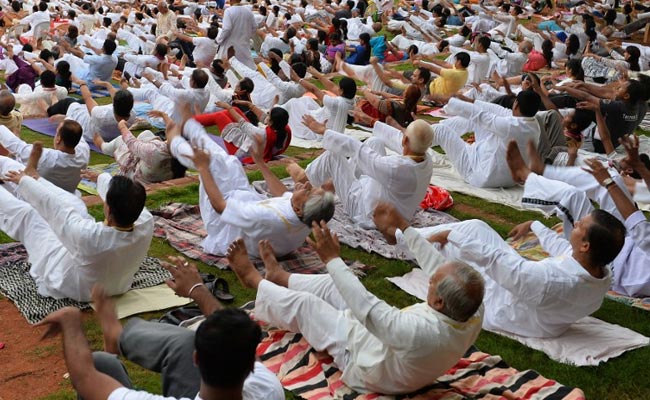 Panaji: Every country in the world will participate in the International Yoga Day event, scheduled to be held on June 21, Union Minister of State for Ayush Shripad Naik said on Monday.

Speaking to reporters in Panaji, Mr Naik said there is no compulsion on schools and other institutions to hold Yoga Day events and that no holiday has been declared as the event is an early morning activity.

"The situation is that 100 per cent countries in the world this year will do Yoga," Mr Naik told reporters.

"The programme was held in 199 countries last year. This year, more countries will be added to the list and programmes will be held through our embassies and missions," the North Goa Lok Sabha member said.

The Minister also said the main International Yoga Day event would be held in Lucknow and attended by over 51,000 yoga enthusiasts, along with Prime Minister Narendra Modi and Uttar Pradesh Chief Minister Yogi Adityanath.

"Over 51,000 people will be participating. As there is paucity of space, screens will be put up in eight to nine parks nearby and simultaneously Yoga will be conducted," Mr Naik said.

"We have requested to the state governments to organise a big programme. NGOs, schools and colleges also have been asked to hold their own events," he said, adding that central ministers would be attending the major Yoga-related programmes in every state.

"There is no compulsion (to hold Yoga Day in schools). We are encouraging yoga for the betterment of one and all," he said in response to a question.

Promoted
Listen to the latest songs, only on JioSaavn.com
Mr Naik ruled out the possibility of a state holiday to celebrate International Yoga Day.

"We have not declared a holiday as yoga is a morning activity. From 6 a.m. to 7.30 a.m., after the activity is finished, they can go to work. You can opt to take leave on your own account. No special holiday has been announced," Mr Naik said.