"Will Resign From AAP Soon, But Stay On As Lawmaker," Declares Alka Lamba

The AAP legislator from Chandni Chowk has been at odds with party colleagues for many months now. 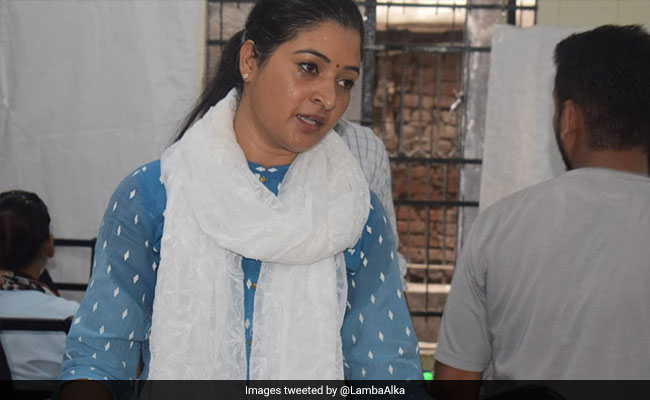 Alka Lamba said she will send her resignation letter to the AAP leadership soon.

Disgruntled Aam Aadmi Party (AAP) legislator Alka Lamba today said that she was on the verge of resigning from the primary membership of the party over differences that have cropped up with her colleagues over the years. The lawmaker from Chandni Chowk, however, clarified that she will not be giving up her position in the Delhi assembly.

"I thought I should talk to the people and take a decision. It has been decided that I should break all ties with the Aam Aadmi Party and resign from its primary membership. I'll soon tender my resignation from the primary membership of AAP in writing. But I will continue to be an MLA," news agency ANI quoted her as saying.

This is the second time Ms Lamba has announced her plans to ditch AAP over the last few days. Earlier this week, the legislator said that "repeated insults" from seniors in the party have made her seriously consider quitting it and contesting the upcoming state elections as an independent candidate. "I'm not called to meetings. I am insulted repeatedly. I spent 20 years in the Congress, and while I struggled with family politics even there, I do not even get basic respect in AAP," news agency PTI quoted her as saying then.

The AAP leadership dismissed her statements to the media as a "publicity stunt".

"Alka Lamba is a serial attention seeker. She has declared many times in the past about quitting the party but she is scared of losing her MLA seat. If she had to resign, she should send a resignation letter to the party leadership, which she has not done. Declaring such things to the media is just theatrics," Saurabh Bharadwaj, the party's Greater Kailash legislator, said.

Last month, Ms Lamba had accused Arvind Kejriwal, AAP Convenor and Delhi Chief Minister, of creating obstacles for the CCTV installation work being carried out in her constituency. She said that Mr Kejriwal's "attempts at revenge" were affecting the lives of people in Chandni Chowk, and asserted that she would not let "her people fall victim to AAP's vendetta politics".

While Ms Lamba has been at odds with her party for many months now, things came to a head earlier this year when she sought accountability from Mr Kejriwal for AAP's poor performance in the Lok Sabha elections. Following this, she was removed from the party's official WhatsApp group.

The first major flare-up between Ms Lamba and her colleagues in the party occurred last December, when she refused to back an alleged AAP resolution to revoke former Prime Minister Rajiv Gandhi's Bharat Ratna award. The legislator was a member of the Congress' women's wing before she joined AAP ahead of the 2013 Delhi elections.