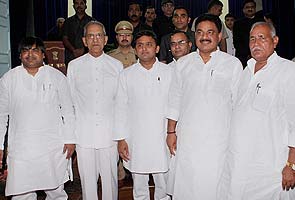 Lucknow: In its third expansion in 17-month-old regime, the Uttar Pradesh government today inducted four ministers in the cabinet.

The ministers who took oath today are Narad Rai, Kailash Yadav, Ram Moorti Verma and Gayatri Prasad Prajapati. They were sworn in at a ceremony at the Raj Bhawan in the state capital Lucknow.

There were strong indications from the SP leaders that independent legislator from Kunda, Raghuraj Pratap Singh alias Raja Bhaiya, would also be sworn in again as a minister in the Akhilesh Yadav government, but he was not included in the reshuffle.

Raja Bhaiya had quit in March following allegations of having a role in the murder of deputy superintendent of police Zia-ul-Haq.

Promoted
Listen to the latest songs, only on JioSaavn.com
With today's expansion, the number of ministers in the Akhilesh Yadav government has gone up to 60.