Ajit Pawar, who is also guardian minister for Pune district, said that in the last few days 2,200 hospital beds have been added for treatment of coronavirus patients in the city and neighbouring Pimpri Chinchwad. 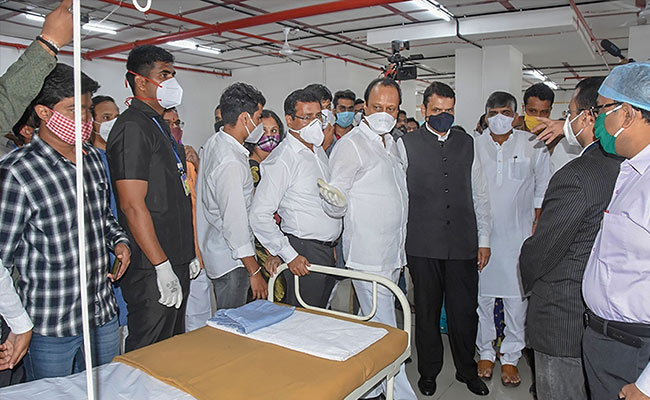 Maharashtra Deputy Chief Minister Ajit Pawar and Leader of Opposition in the Assembly Devendra Fadnavis were seen together at the inauguration of a COVID-19 hospital in Baner area in Pune today.

The two had come together on November 23 last year when Mr Fadnavis was sworn in as chief minister and Mr Pawar as his deputy in a morning ceremony. Mr Pawar, an NCP stalwart, broke ranks to join the BJP leader to form government after the BJP fell out with the Shiv Sena.

However, the BJP-Ajit Pawar government lasted for just 80 hours after which he got back into the NCP fold and became a Cabinet minister in the Shiv Sena-led dispensation.

On Friday, Mr Pawar and Mr Fadnavis stood side by side and addressed the gathering in Baner.

Ajit Pawar, who is also guardian minister for Pune district, said that in the last few days 2,200 hospital beds have been added for treatment of coronavirus patients in the city and neighbouring Pimpri Chinchwad.

Referring to the phase 3 human trial of the Oxford vaccine which began in Pune earlier this week, he expressed confidence that soon there will be "affirmative picture in the state and country".

Mr Fadnavis said that every day on average 15,000 new cases are being reported in Maharashtra.

"The main concern is that the positivity rate of the infection is still 19 to 19.5 per cent. As per the ICMR, it should be 5 per cent and where there is high infection (rate), it should be 10 per cent," he said.

The BJP leader also said that the state accounts for nearly 40 per cent of coronavirus deaths in the country. "Since our current death rate is still 3.2 per cent which is above the national average, it is a matter of concern," Mr Fadnavis said.