The Tirupati runway reportedly had to be closed after the incident, stranding many passengers. The underside of the plane was damaged in the incident.

An Air India plane was damaged while taking off from the Tirupati Airport this afternoon, reportedly because of the poor condition of its runway. Although none of the passengers suffered any injury in the incident, the aircraft was grounded at Hyderabad airport as a safety precaution.

Sources quoted airport staffers as saying that objects and abrasive particles on the runway rose up during the take-off process, damaging the underside of the plane. The runway reportedly had to be closed after the incident, stranding many passengers.

While technical snags in aircraft are a regular occurrence, runways do not cause problems as often. One of the two engines in a Lucknow-Jaipur plane stalled mid-air last week, forcing the pilot to turn back to the Uttar Pradesh capital. The pilot of the IndiGo 6E-451 reportedly detected high vibration levels in the engine after it stalled 40 minutes into the flight. 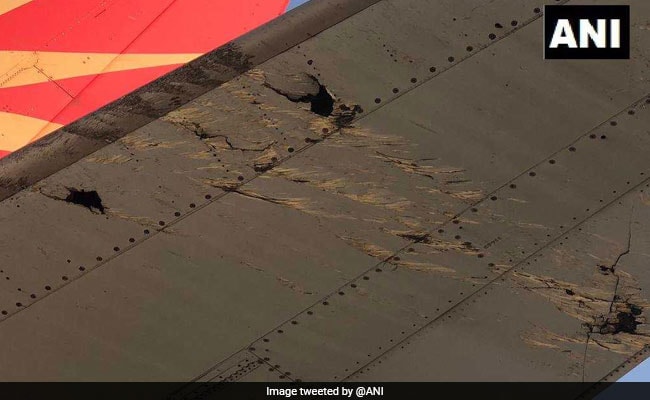 The damage caused to one of the wings of the aircraft.

Earlier this month, the Directorate General of Civil Aviation (DGCA) had banned IndiGo and GoAir from operating their A320neo planes to Port Blair in the wake of problems with their Pratt & Whitney engines. Both the aircraft carriers were forced to ground their A320neo planes due to issues concerning their engines.

On January 3, a Kolkata-bound IndiGo Airbus A320neo plane had suffered a mid-air engine failure with a "loud bang" -- spurring the civil aviation ministry to take serious note of the incident. Following that, the aircraft returned to Chennai under emergency conditions.