The Prime Minister's Office posted a couple of photographs from the meeting, which was attended by the chief executive officers (CEOs) of some top oil companies based in the United States. 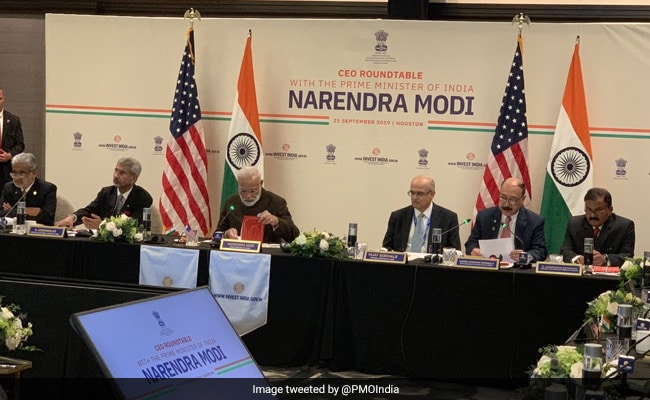 PM Modi in Houston, Texas meeting with CEOs from the energy sector.

Prime Minister Narendra Modi had a "fruitful" meeting with CEOs from the energy sector on the first day of his week-long US visit here on Saturday, the Ministry of External Affairs (MEA) said.

It added that the meeting focussed on working together for energy security and expanding mutual investment opportunities between India and the United States.

Getting straight to business.

PM @narendramodi just concluded a fruitful interaction with top energy sector CEOs at a Roundtable meeting in #Houston. Discussion focused on working together for energy security and expanding mutual investment opportunities between India & US. pic.twitter.com/UHnEFd9Oll

Earlier, the Prime Minister's Office (PMO) had posted on Twitter a couple of photographs of Modi's meeting with the chief executive officers (CEOs) of some of the top oil companies based in the US.

"Further energising India-USA friendship. Among the first engagements of PM @narendramodi in Houston is a meeting with CEOs from the energy sector. India and USA are looking to diversify cooperation in this sector," the PMO tweeted.

The prime minister is scheduled to address over 50,000 Indian-Americans at the "Howdy, Modi" event on Sunday, in which he will be joined by US President Donald Trump. The event at the sprawling NRG football stadium here will be the largest gathering ever for an elected foreign leader visiting the US, other than the Pope.