Ahead of Assembly elections, CPM brainstorms in Kolkata 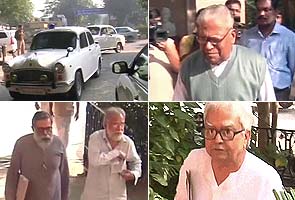 Kolkata: The CPI-M politburo meets in Kolkata today for a two-day session, primarily to finalise the party's strategy and prospects in poll-bound five states, particularly West Bengal and Kerala, and its stand on the 2G spectrum scam and rising food prices.

The meet comes at a time when the ruling CPI-M-led Left Front is in a tight situation following a sudden spurt in political violence in West Bengal where Assembly elections will be held a few months from now.

The Marxist party has also encountered stepped up political activity by main opposition Trinamool Congress, which is making a determined bid to replace the ruling front. Party sources said that the meeting assumes greater significance in view of the Election Commission's expression of anguish at the deterioration of law and order and its unprecedented decision to dispatch a six-member team of observers to monitor the situation in the state.

According to them, the politburo is also likely to take up Union Home minister P Chidambaram's series of communications to Chief Minister Buddhadeb Bhattacharjee on law and order in the last few days "which the CPI-M feels biased in nature".

Although no agenda of the meeting was available, the sources said that the strategy and course of action in Parliament on the 2G spectrum issue, when it meets for the budget session in February, may figure prominently.

CPI-M's state secretary Biman Bose, they said, would submit a political and organisational report to the politburo.

The politburo is also expected to review and sort out the "growing bitter relations" between Kerala Chief Minister VS Achutanandan and state party secretary P Vijayan ahead of the Assembly elections in the state.
Comments
CPMPolitburoAssembly eklection in West BengalKerala Assembly election