'Agnipath' Scheme: Over 34 Trains Cancelled Due To Protest Says Railways

Protests were reported from several places across the country against the Agnipath scheme. 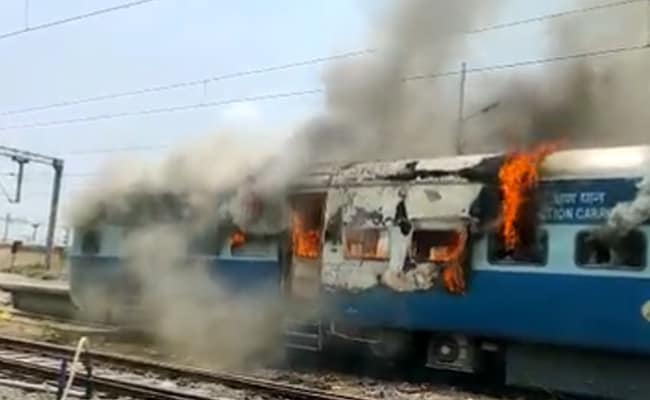 The railways said 72 trains were also running late due to protests over 'Agnipath' scheme.

Over 34 trains were cancelled and eight more partially cancelled on Thursday due to protests against the "Agnipath" scheme to recruit youngsters into the armed forces and delays in the Railway Recruitment Board (RRB) exams.

The railways said 72 trains were also running late due to the protests.

Five mail and express trains and 29 passenger trains were cancelled.

Protests were reported from several places across the country against the Agnipath scheme.

At Nangloi, protesters blocked the railway track and raised slogans against the recently-announced scheme.

The Delhi Police said they received information at around 9.45 am that 15-20 people gathered at the Nangloi railway station to protest against the Agnipath scheme as also the delay in the RRB exams.

The protesters told the police that they had filled up forms for some government examinations two-three years ago but the exams were not held and they have become over-aged now. The protesters were pacified and dispersed by the police around noon.

A total of 22 trains were cancelled in the East Central Railway zone alone.

The Centre announced the Agnipath scheme on Tuesday for the recruitment of soldiers in the Army, the Navy and the Air Force on a short-term contractual basis, apparently to cut the ballooning salary and pension bills and carve out a youthful profile of the armed forces.

The move has drawn the ire of defence force aspirants, who have taken to the streets at a number of places, especially in Bihar.

Protests against the scheme continued across Bihar for the second consecutive day on Thursday as the demonstrators disrupted railway and road traffic in Jehanabad, Buxar and Nawada districts.

People blocked the movement of trains on the Patna-Gaya and Patna-Buxar routes by lying down on the railway tracks in Jehanabad and Buxar districts. They were removed from the tracks by police.