Hima Das won the gold medal in the women's 400 metre event at the IAAF World U20 Championships in Finland. 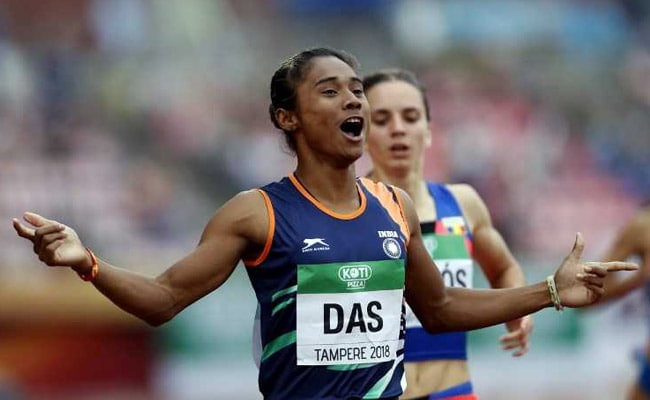 Hima Das won a gold medal at the IAAF World U20 Championships in Tampere, Finland.

The Athletics Federation of India apologised on Twitter today after being pummelled by critics on social for a tweet about the country's newest champion Hima Das that rubbed her fans the wrong way.

Posting a video of journalists interviewing Hima Das, who won India's first gold medal at an international track event on Thursday, the AFI tweeted: "Not so fluent in English but she gave her best there too." The tweet triggered an angry stream of messages from users who expressed their resentment at the organisation for highlighting that particular point. 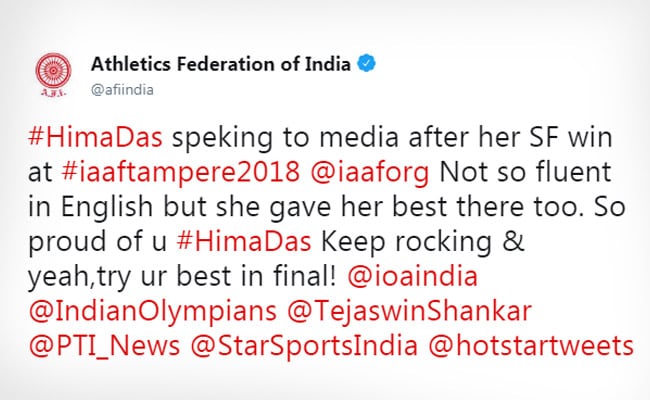 Even if you mention, why did you misspell speaking as speking? .

Hima should have replied in Hindi, there is absolutely no reason for her to speak English at all, unless except the fine English speaking gentleman/gentlemen at @afiindia wanted to look more English than the British

Who cares about her English?!!! Its just a language meant for easing communication. She speaks with with her strides. And her speech is pure poetry. Period.

"We apologise to all Indians if they were hurt by one of our tweets. The real intention was to show that our runner is undaunted in any situation - on the field or off it! Despite coming from a small town, she spoke without hesitation to foreign reporters in English! Once again we apologise to those offended, Jai Hindi!" it wrote in Hindi.

No issue.
You hv done nothing wrong.
Insaan se misinterpretation ho hi Sakta h.
Bdw thanks for this tweet

Good I suggest you to delete the tweet also

Hima Das created history by winning the gold medal in the women's 400 metre event at the IAAF World U20 Championships in Tampere, Finland on Thursday. Hailed as one India's biggest sporting achievements, the medal was India's first gold at a global track event.