After Sukhoi, President Patil to ride a golf cart 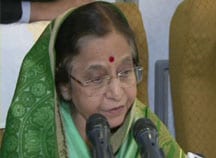 Panaji: After making history by flying in a frontline Sukhoi fighter jet a couple of years ago, President Pratibha Patil will hop on to a rather modest machine on her way to a beach here Tuesday - a golf cart.

Patil, who landed in Goa Monday on a four-day private visit to the state, will be riding the buggy or a small shuttle cart, from the Taj Exotica Hotel located in south Goa to the secluded Benaulim beach adjoining the five-star property.

"The president will be having her brunch on Tuesday at the Taj Exotica around 11 a.m. and will be riding the buggy to the Benaulim, where she will spend a few minutes," a senior officer attached to the state protocol department told IANS Monday.

Patil is being hosted at Raj Bhavan, located on the outskirts of Panaji, nearly 45 km from the Benaulim beach.

The beach sees relatively fewer tourists as compared to other beaches like Colva and Betalbatim, which are also in the vicinity.

Patil is being accompanied by her husband Devi Singh Shekhawat, daughter Jyoti Rathore and grand-daughter Vedika Rathore. Patil is expected to head back to Pune from Goa Jan 6.

In November 2009, Patil had flown in the Sukhoi-30 MKI fighter jet at the Lahegaon air force base in Pune.
Comments
PresidentPratibha PatilGoagolf cartPanaji