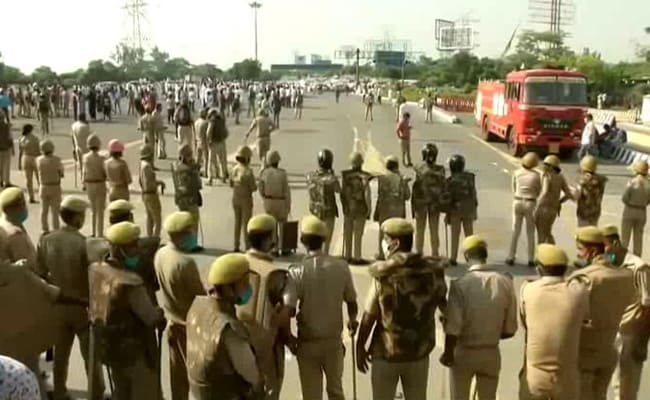 Hathras Gang Rape: Over 200 policemen were at the DND Flyway near Delhi on Saturday afternoon (File)

The Gautam Buddh Nagar Police has filed an FIR against over 500 Congress workers, charging them with unlawful assembly two days ago at the Delhi-Uttar Pradesh border in Noida amid the COVID-19 outbreak, officials said on Monday.

Hundreds of Congress workers and leaders, including Rahul Gandhi and Priyanka Gandhi Vadra, were on their way to Hathras on Saturday afternoon to meet the family of a woman who died after an alleged gangrape.

There were scuffles involving Congress workers and the Gautam Buddh Nagar (Noida) Police at the DND toll plaza during which police personnel had baton charged the crowd. Some party leaders, including Priyanka Gandhi, were manhandled, while some policemen were also hurt.

According to the FIR lodged a little earlier before midnight on October 3, the Congress workers have been booked under relevant sections of the IPC and under section 3 of the Epidemic Diseases Act.

The FIR has been lodged on a complaint by Rakesh Kumar Singh, the SHO of the Sector 20 police station.

On October 2 also, the Gautam Buddh Nagar Police had lodged an FIR against around 200 Congress workers and leaders, including Rahul Gandhi and Priyanka Gandhi Vadra, under the Epidemic Diseases Act for not maintaining social distancing and not wearing face masks.

The party workers were detained while they were on foot on the Yamuna Expressway in Greater Noida in a bid to go to Hathras.

Gautam Buddh Nagar is currently under CrPC section 144, which restricts assembly of more than four people, in view of the pandemic.