After Delhi Metro videos are leaked, passengers asked to behave 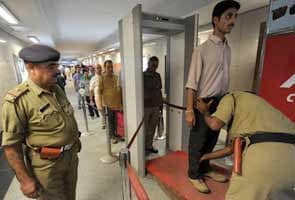 New Delhi: No more fooling around on Delhi Metro trains for couples.

The Delhi Metro Rail Corporation (DMRC), plagued by leaks of CCTV videos of couple getting intimate on their trains, has asked people to maintain "decorum and etiquette" while travelling on the metro.

The DMRC's statement came just after another video surfaced online, showing a couple on the stairs of a Metro station and inside a train. The video clip is being investigated, said the DMRC spokesperson Anuj Dayal.

The DMRC complained to the cyber cell of the Delhi Police and blamed the Central Industrial Security Force (CISF) for the leakage as it monitors CCTV footage. But CISF denied it, saying they were just the monitoring agency.

Promoted
Listen to the latest songs, only on JioSaavn.com
The metro ferries nearly two million passengers on weekdays and makes over 2,800 trips daily. Couples have been known to seek out compartments that are almost empty during late hour.

But both the DMRC and the CISF plan to get tough on such couples from now.