In the past few weeks, scores of people showed up in solidarity, holding up posters and messages for Shah Rukh Khan and his son Aryan. 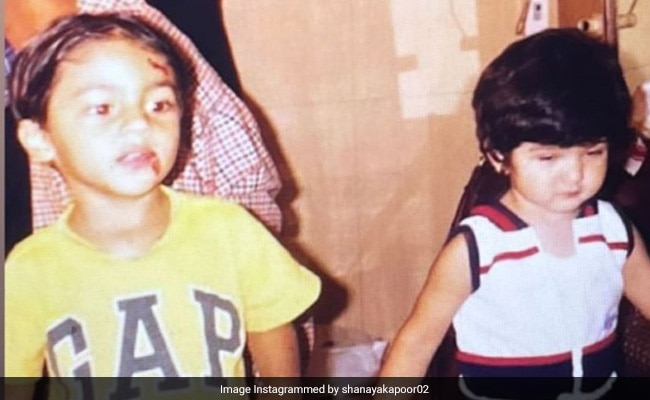 Shanaya Kapoor posted an adorable photo of Aryan Khan and her from nearly 20 years ago on her Instagram story with two red heart emoticons as the star son was granted bail by the Bombay High Court on Thursday in the drugs-on-cruise case. Ms Kapoor, who is the daughter of Sanjay Kapoor and Maheep Kapoor, shared the throwback picture from what appears to be a party.

In the past few weeks, scores of people showed up in solidarity, holding up posters and messages for their idol. Within the film industry, besides Salman Khan, Farah Khan and Hrithik Roshan, few others have openly showed their support.

"There is God. Thank you everyone for your love and prayers. Truth prevails," wrote Shah Rukh Khan's manager Pooja Dadlani, who the Narcotics Control Bureau (NCB) had accused of tampering with evidence and witnesses in an attempt to derail the investigation.

"I'm very happy that Aryan Khan has gotten bail but also very upset with a system that kept a young man behind bars for more than 25 days for something he never did. That has to change!!! God bless you and be strong Aryan Khan," wrote filmmaker Sanjay Gupta.

"Glad to hear #AryanKhanBail has been granted. Request a central investigation into the conduct of #NCBRaids & arresting officer #SameerWakhede. Legal Powers shld (should) not be abused for personal gain," tweeted singer Suchitra Krishnamoorthi.

"Day of twists and turns. #AryanKhan gets bail. The witness of the case #KPGosavi gets arrested. The investigating officer of the case #SameerWankhede approaches Court seeking protection from arrest. All in a single day," tweeted Swara Bhaskar.

The film fraternity came out in support of the 23-year-old star son who was granted bail after three weeks in jail.

Malaika Arora wrote "Thank the lord" on her Instagram with a folded hands emoticon.

The legal team of the 23-year-old will now try to complete the formalities for his release by Friday.

Aryan Khan was arrested on October 3. An NCB team busted an alleged drugs party on the Cordelia Cruise ship which was on its way to Goa at mid-sea on October 2. A total of 20 people, including two Nigerian nationals, have been arrested so far in the case. Since his arrest, Shah Rukh Khan has continued to receive support from his fans and many in the industry while some have maintained silence on the issue.