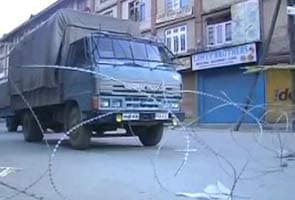 Srinagar: A curfew was declared in all 10 districts of the Kashmir Valley after the execution of Afzal Guru at Delhi's Tihar Jail this morning.

Afzal Guru was convicted more than eight years ago for his role in the attack on Parliament in 2001. His mercy petition was rejected by President Pranab Mukherjee a few days ago.

Afzal Guru's hometown of Sopore in the Kashmir Valley is under curfew. Sensitive areas in Srinagar, just 35 kms from Sopore, have been sealed. The army is on high alert.

Cable TV services are reported to have been disconnected in some parts of the Valley.

Promoted
Listen to the latest songs, only on JioSaavn.com
Afzal Guru, a Kashmiri Muslim, had been on death row for nearly eight years. Chief Minister Omar Abdullah has repeatedly stressed that his execution could have serious repercussions in his state.

Afzal Guru was sentenced to death in 2004 by the Supreme Court for his role in the attack on Parliament in 2001. Five terrorists drove into the Parliament complex and opened fire. They were shot. Nine others people were killed, most of them security guards.