Aero India: BJP MP Tejasvi Surya was taken on a short flight on board the Light Combat Aircraft (LCA) Tejas 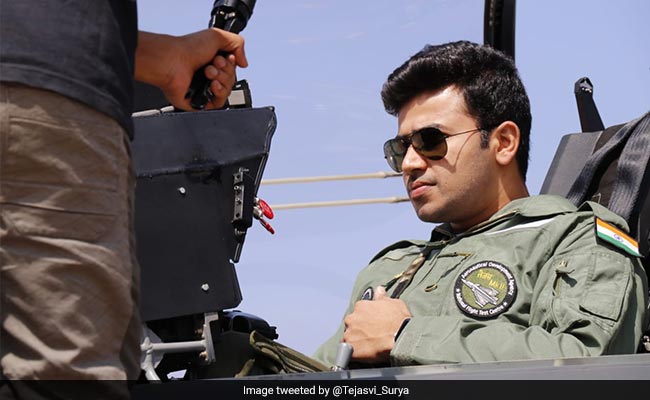 BJP MP Tejasvi Surya has tweeted photos of his ride in the Light Combat Aircraft Tejas at the Aero India event in Bengaluru. Strapped to the rear seat of the two-seater version of the homemade fighter jet and wearing black aviator sunglasses, Mr Surya is seen taking instructions from the ground staff as they prepared him for the flight above the skies of Bengaluru.

Hindustan Aeronautics Ltd (HAL) on Wednesday signed a contract with the Defence Ministry to make 83 LCA Tejas, short for Light Combat Aircraft. The latest order is for the Mk-1A variant and 10 Mk-1 trainers.

HAL chairman and managing R Madhavan said the company has to start delivering the fighter jets in 36 months, with the first aircraft expected by March 2024. "The first delivery will be two aircraft or something, which will be ramped up to 16. The total supply time post the first delivery is six years, that makes the total project time line of nine years. We will try to reduce it to somewhere around (by) one year," Mr Madhavan said.