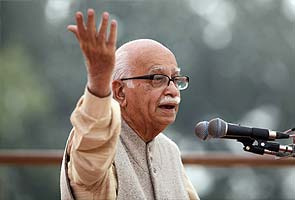 The veteran BJP leader arrived at Renigunta airport, near Tirupati, on Friday afternoon. After an overnight stay on the hills, he offered prayers at the temple, where he spent about half an hour, temple sources said.

He was then presented with sacred prasadam, a silk cloth and celestial water in 'Ranganayaka Mandapam' in the temple by Tirumala Tirupati Devasthanams (TTD) Chairman, K Bapiraju and other top TTD officials, they added.

Later, Advani took part in the Parliamentary Standing Committee on Home Affairs meeting under the Chairmanship of M Venkaiah Naidu along with seven committee members, including Kanimozhi, daughter of DMK chief M Karunanidhi, with top TTD and other security officials.

The members at the meeting, held in a TTD guest house, discussed measures to enhance security at the hill shrine and are slated to submit a report to Parliament at the earliest, they said.
Comments
Advani