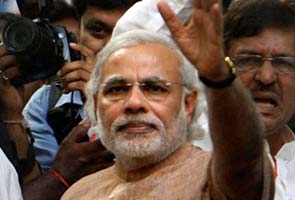 Ahmedabad: After Gujarat Chief Minister Narendra Modi was unceremoniously dropped as the keynote speaker at an event at the  Wharton Business School, one of the main sponsors of the conference, the Adani Group, has decided it will withdraw its funding.

The gesture is an apparent show of loyalty to Mr Modi; the Adani Group is headquartered in Gujarat.

Shiv Sena leader Suresh Prabhu said this morning that he had decided to skip the event after Mr Modi was disinvited. "This is not just an insult to the Gujarat chief minister but to all of India," he said. (Read)

Earlier today, a spokesperson said that Mr Adani had told  the business school days ago that would not be able to  attend The Wharton India Economic Forum  because of a scheduling conflict.  This evening, Wharton confirmed that the Adani Group had decided it would no longer be a "platinum sponsor." Sources said the conference is not in jeopardy because there are five other sponsors sharing the costs.

Mr Modi was scheduled to deliver his speech via video-conference on March 22-23.   Pressure from the management and alumni resulted in his removal from the programme.

The controversy underscores that despite winning Gujarat for a third time in December's election, the shadow of the communal riots in Gujarat in 2002 looms over Mr Modi's political horizon. More than 1,000 people, most of them Muslims, were killed on his watch.

Promoted
Listen to the latest songs, only on JioSaavn.com
In recent years, Mr Modi has positioned himself as a leader committed to the development of Gujarat as an investor-friendly destination. He has focused publicly on "pro-people good governance or "P2G2" as his calling card in an attempt to dissipate his image as a right-wing hardliner.

European countries have ended a 12-year boycott of the chief minister. But the US, which has not granted him a visa since the riots, said recently that it has not revised its policy.