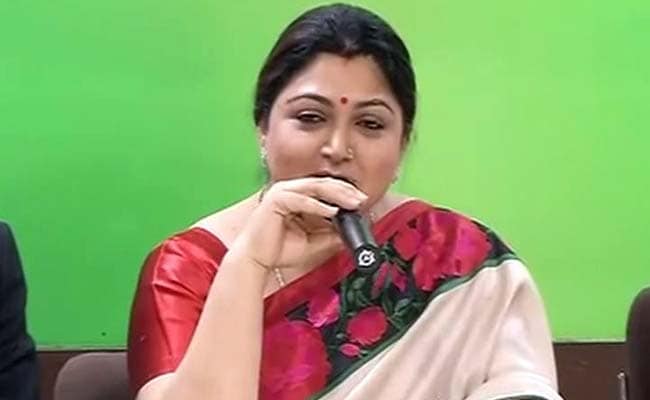 New Delhi: Five months after she quit the DMK, actor-politician Khushbu has joined the Congress.

"I finally feel I am home," she told reporters after meeting Congress President Sonia Gandhi at her home in Delhi.

The 44-year-old said she felt the Congress was the "only party that could do good for the people of India and unite the country."

Khushbu quit the DMK, headed by M Karunanidhi, in June. She had joined the party in 2010, when it was in power in Tamil Nadu. While announcing her exit, she said her "hard work for the DMK had been a one-way path."

The Congress has been reduced to a virtual spectator in Tamil Nadu politics. It did not win a single parliamentary seat in the May election; the ruling AIADMK, led by J Jayalalitha, won all but two.

In the last state election in 2011, the Congress won just five seats. But recently, the party was split with senior leader and former Union minister GK Vasan announcing the launch of his own outfit.

Khushbu has worked in over 100 films with stars like Rajinikanth, Kamal Hassan, Mammootty and Mohanlal.

Promoted
Listen to the latest songs, only on JioSaavn.com
In 2010, the Supreme Court removed 22 cases filed against her for her remarks on pre-marital sex in a print interview.