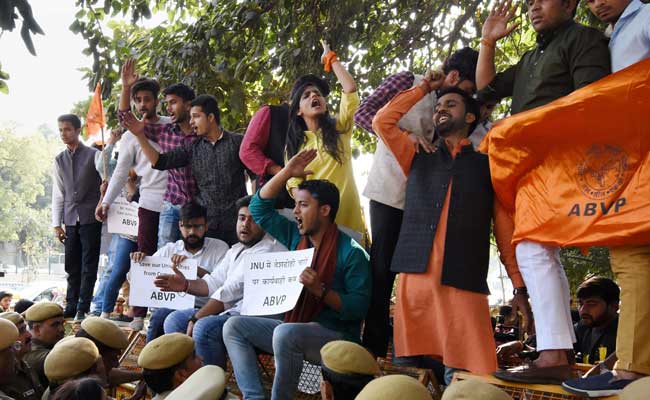 The ABVP activists said students can study in their respective colleges without fear. (PTI photo)

New Dellhi: Members of the RSS-backed ABVP today staged a protest outside Delhi Police headquarters demanding that a charge sheet be filed in last year's sedition case against three JNU students. Kanhaiya Kumar, Umar Khalid and Anirban Bhattacharya were arrested in February last year over sedition charges in connection with an event on the JNU campus during which anti-national slogans were allegedly raised.

ABVP had then objected to organising the event protesting against hanging of Parliament attack convict Afzal Guru. While the three students are out on bail, no charge sheet has been filed in the case yet.

"One year has passed and still no charge sheet has been filled against those who raised anti-national slogans. We came here to demand strict action against them so that in future such slogans are not raised," ABVP office bearer and president of Delhi University Students' Union (DUSU), Amit Tanwar, said.

Promoted
Listen to the latest songs, only on JioSaavn.com
"They did it in JNU and now they are eyeing DU. To all the students, we want to say that they don't have anything to fear. They can come and study in their respective colleges and we assure that their will be no violence," he said.

The protest comes a week after the ABVP had objected to an invitation to JNU students Umar Khalid and Shehla Rashid to speak at a seminar at Delhi University's Ramjas College. While the college administration withdrew the invitation following opposition by the ABVP, it led widespread violence after clashes between the RSS' students' wing and the Left-affiliated All India Students' Association (AISA).