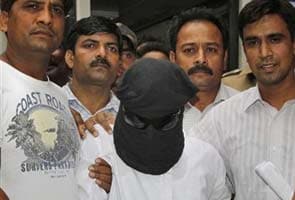 New Delhi: 26/11 handler  and Lashkar-e-Taiba (LeT) operative Syed Zabiuddin Ansari alias Abu Jundal has been produced in Delhi's Tis Hazari Court. The Special Cell of the Delhi Police, which arrested Jundal on June 22, has sought an extension of his remand - which ends today - by another 15 days.

In court, the judge questioned the Delhi Police why should Jundal's custody be extended, especially when other investigating agencies like the Mumbai's crime branch, the Anti-Terrorism Squads of Maharashtra and Pune, the Gujarat and the West Bengal police along with the National Investigating Agency (NIA) are also asking for custody. The Delhi Police replied that it cannot disclose that in the open, after which the judge ordered the press to leave the court.

Several investigation agencies, which seek Jundal's custody, suspect his involvement in cases like the German bakery blast and in a conspiracy to attack Gujarat Chief Minister Narendra Modi.

Jundal was deported from Saudi Arabia to India last month. Originally from Beed in Maharashtra, the 31-year-old has confessed that he helped coordinate the attacks in Mumbai in 2008 in which 166 people were killed. Jundal was stationed at what he describes as a "control room" near the Karachi international airport. He has told Indian intelligence agencies that from there, a team of six handlers including him passed on detailed instructions to the ten terrorists who were unleashing India's worst-ever terror attacks at different Mumbai landmarks. He has said a man referred to by him and the others as Major Sameer visited the control room while Mumbai was being ravaged. The Major allegedly passed on orders to Zaki-ur-Rehman Lakhvi, a senior commander of the terrorist group Lashkar-e-Taiba, who was arrested after 26/11 by Pakistan.

Jundal has said that Lakhvi had a house within a camp for terrorists at Bait-ul-Mujahideen near Muzaffarabad. Here, the Lashkar commander stayed with his three wives.

Jundal has told Indian officials that after 26/11, the control room in Karachi was raided and those who had been based there were asked to disperse. After Lakhvi's arrest, a handler for 26/11 named Muzammil took over as the Lashkar chief. He allegedly took Jundal to Muzaffarabad in Pakistan-Occupied Kashmir to meet an officer of the ISI who was referred to by the terrorists as Colonel Hamza. The ISI officer then gave instructions to Jundal to stop using his phone and to be careful about where he was seen.

Jundal then obtained a Pakistani passport in the name of a Riyasat Ali and left for Saudi Arabia in March or April of 2011.

Promoted
Listen to the latest songs, only on JioSaavn.com
Details shared by him have led to India reiterating that the 26/11 attacks would not have been possible without Pakistan's support. Pakistan has emphatically denied those allegations. In Delhi, Pakistan's Foreign Secretary Jaleel Abbas Jilani said that Pakistan is "even willing to offer a joint investigation" into the statements made by Jundal.

"Whatever evidence India has should be shared with us and we will investigate the matter. We are even willing to offer joint investigation into the whole affair but finger-pointing won't help," said Mr Jilani. "We hope not," he said when asked if Jundal's revelations will hurt the progress India and Pakistan have made in recent months on matters like better cooperation in trade. "We cannot afford a setback," he said.