Lok Sabha Election 2019: "He (PM Modi) announced that Master Plan for Kedarnath Temple is ready..." Trinamool said in a letter to Election Commission. 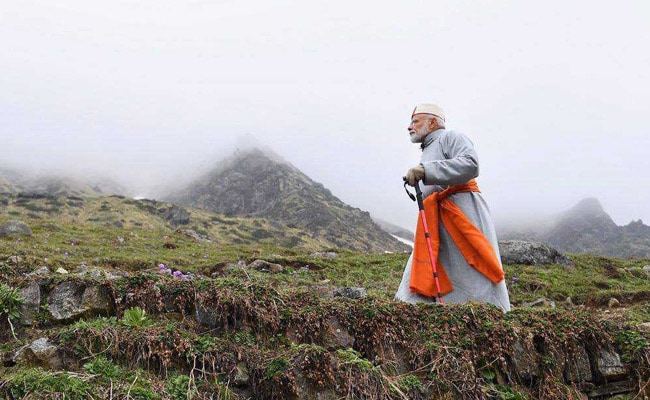 The Trinamool Congress has complained to the Election Commission that Prime Minister Narendra Modi's "widely televised" visit to Kedarnath shrine in the higher reaches of Uttarakhand was a violation of the Model Code of Conduct. PM Modi will also visit Badrinath today.

"...Even though the Election Campaign for the last phase of polling for 2019 Lok Sabha is over as long as back on 17th May, 2019 at 6 pm, surprisingly Shri Narendra Modi's Kedarnath Yatra is being covered and widely televised for the last two days in all national as well as local media. This is a gross violation of the Model Code of Conduct," the party led by West Bengal Chief Minister Mamata Banerjee said in a letter to the election body today.

"He even announced that the Master Plan for the Kedarnath Temple is ready and also addressed the public and the media at Kedarnath. It is absolutely unethical and morally incorrect," said the letter signed by Trinamool parliamentarian Derek O'Brien.

In photos tweeted by the Uttarakhand BJP on Saturday, PM Modi, 68, is seen meditating in a cave seated on a bed and propped up by a pillow, dressed in saffron robes. Another picture shows him folding his hands and bowing in the cave.

The Election Commission had allowed PM Modi to visit the Himalayan shrines with a reminder that the Model Code was still in force.

"Every minute detail of his activities during the visit is being widely publicized with an ulterior motive to influence voters directly and/or indirectly. 'Modi Modi' chants are also being heard from the background. All these moves are well calculated with the ill intention to influence the voters even on the date of poll. It is very unfortunate that the Election Commission, the highest body and the eyes and ears of the democratic process, remains blind and deaf to the gross violation of the MCC," the Trinamool said in the letter.

The Election Commission has come under attack from opposition parties over deciding violations of the Model Code, after it ruled that it found no transgressions on the PM's part in six instances, including a speech he gave in Gujarat on April 21 where he claimed that his government had kept Pakistan on its toes to ensure the safe return of captured pilot Abhinandan Varthaman.

One of the Election Commissioners, Ashok Lavasa, who dissented against giving clean chits in alleged Model Code violations, has skipped meetings of the full commission in what was seen as his way of registering his protest.

Congress parliamentarian Pradip Bhattachraya has also written to the Election Commission. "The way he (PM Modi) ensured media coverage of his trip to Kedarnath temple is nothing but a violation of MCC. His trip is all over the media. Is this not a way to directly and indirectly influence voters ahead of polls?" Mr Bhattacharya said, news agency PTI reported.

Union Minister Babul Supriyo attacked the Trinamool Congress for complaining to the Election Commission. "TMC should not behave like a crying baby," Mr Supriyo said, news agency ANI reported. "TV channels should decide what they want to cover. If cricketer Sachin Tendulkar goes to vote and then decide to drive by himself to Pune then media will definitely cover it... It depends on the importance of a particular person on how much media covers him."

Seven states and one Union Territory is voting in the last round of the seven-phase national election today. Results will be out on May 23.