AAP Member Paid Rs 9,000 For Posters Against PM, On The Run: Police

An AAP member is the brain behind posters that cropped up in Delhi criticising PM Narendra Modi's handling of the Covid crisis, the police said. 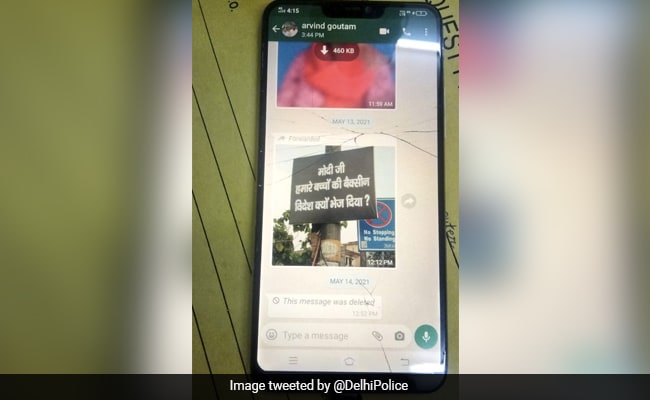 Arvind Gautam paid Rs 9,000 for the posters to be created, the police said.

An Aam Admi Party (AAP) member is the brain behind the posters that appeared around parts of Delhi a few days ago criticising Prime Minister Narendra Modi's handling of the Covid crisis, the police said today. The accused, identified as Arvind Gautam, is now on the run, they said.

The posters, with white text on black background, sarcastically asked in Hindi: "Modi ji, why did you send vaccines meant for our children, abroad?"

This was in response to the acute vaccine shortage India faced during the second wave of the COVID-19 pandemic. The country had exported a large number of made-in-India doses as part of what was dubbed "vaccine diplomacy" before the disease turned particularly deadly at home around February.

Mr Gautam's name came up during the questioning of several accused persons, Delhi police tweeted referring to the AAP's president of Ward 47 in the Mangolpuri area.

At least 17 people have been arrested till now over posters that came up in the past few days. The case was filed around May 12 midnight under the Prevention of Defacement of Public Property Act, 2007, the police said in a statement. The Delhi police falls under the Union Home Ministry.

"No details of the printing press/publisher were mentioned on these posters...The accused persons disclosed during interrogation that Arvind Gautam had sent an order on WhatsApp to Rahul...and Rs 9,000 for printing and affixing these posters/hoarding," the statement said.

The arrest of several people in this case has set off a massive backlash as top opposition parties and leaders slammed the government for the move. Some such as the Congress's Rahul Gandhi, Priyanka Gandhi, and Jairam Ramesh, besides leaders of other parties like the Trinamool, tweeted the text of the poster and dared the Centre to arrest them.

12 Arrested Over Posters Against PM Modi In Delhi

The Delhi police has now accused an AAP member of being the brain behind the posters.