AAP legislator and Leader of Opposition in the Punjab Assembly Harpal Singh Cheema said party workers have taken out two-wheeler rallies across the state to mobilise people for the tractor parade in the national capital on Republic Day. 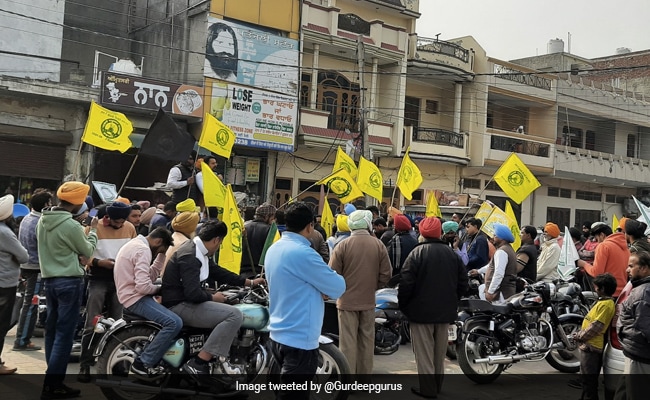 The Punjab unit of the Aam Aadmi Party (AAP) took out motorbike rallies in several parts of the state today to mobilise people for a proposed tractor parade of farmers in Delhi on January 26.

AAP legislator and Leader of Opposition in the Punjab Assembly Harpal Singh Cheema said party workers have taken out two-wheeler rallies across the state to mobilise people for the tractor parade in the national capital on Republic Day.

The motorbike rallies were organised at many places in Punjab, including Sangrur, Mohali and Faridkot.

The AAP workers taking part in the rallies carried placards with slogans such as "No Farmer No Food" and "Kisan Mazdoor Ekta Zindabad".

The AAP has already announced that it will join the farmers' tractor parade in Delhi but "not as a political party".

MLAs and office-bearers from the party's Punjab unit would take part in the tractor parade on January 26.

The farmer unions protesting against three farm laws of the Centre have said that they will go ahead with their proposed tractor parade in Delhi on Republic Day.

They have said the tractor parade will be held on the busy Outer Ring Road in the national capital.

Thousands of farmers, mostly from Punjab, Haryana and western Uttar Pradesh, have been camping at several border points of Delhi since November 28 last year, demanding a repeal of the three farm laws and a legal guarantee to the minimum support price (MSP) for their crops.

Enacted in September last year, the three laws have been projected by the Centre as major reforms in the agriculture sector that will remove middlemen and allow farmers to sell their produce anywhere in the country.

However, the protesting farmers have expressed their apprehension that the new laws would pave the way for eliminating the safety cushion of MSP and do away with the "mandi" (wholesale market) system, leaving them at the mercy of big corporates.