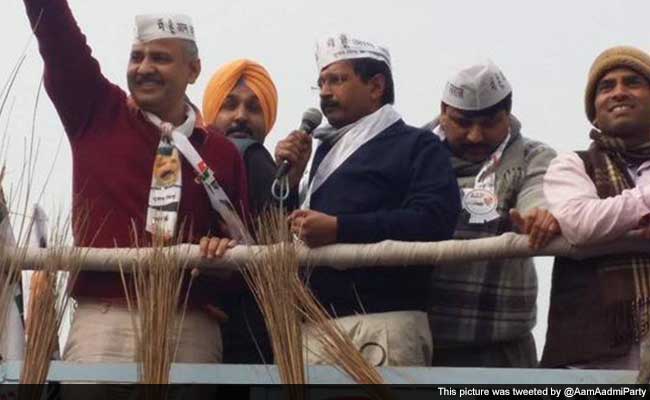 The internal rift in the Aam Aadmi Party seems to be widening. NDTV has accessed three letters that highlight growing dissent within the party and a mistrust among top leaders. While two of these letters - one written by Prashant Bhushan and Yogendra Yadav and another even stronger one by Mr Bhushan - are deeply critical of AAP functioning, the third written by the Delhi state secretary of the party Dilip Pandey is seen as an attempt to counter Mr Bhushan and Mr Yadav.

Here's the full text of the letter written by Mr Pandey:

1.    Before General Elections, 2014, Mr Vijay Raman, who was personal assistant of Mr Yogendra Yadav and was handling his election campaign, phoned Mr Satya, an important party member and told him that Mr. Yadav wanted to interview him for a role in his core team. When Mr Satya went to meet Raman, the latter told him that Mr Arvind Kejriwal didn't have the required political acumen and it was imperative for Mr Yogendra Yadav to take over as National Convenor of AAP after removing Kejriwal from the post. Mr Satya was shocked to hear this. He informed senior members of the party of how Mr Yadav's office was conspiring against Kejriwal and hatching conspiracies to take over as the party convenor.

2.    After the Lok Sabha debacle, this conspiracy against Kejriwal picked up pace. A series of  events ensued that  show that Mr. Prashant Bhushan, his father Shanti Bhushan and Yogendra Yadav entered into a conspiracy to weaken the party from within and then use this to challenge Kerjirwal's leadership and perch Yadav as national convenor.  During a meeting of National Policy Committee in the month of July, in which party member Mr Ashish Khetan was also present, Mr Shanti Bhushan tried to draft Khetan into their conspiracy. Shanti ji told Khetan that the best possible way to remove Kejriwal was to have a BJP government in Delhi state which would mean Kejriwal would become the leader of opposition. Shanti ji told Khetan that once Kejriwal becomes the LOP, they should get together to press the principle of one man one post and make him resign. The way Shanti ji explained the whole plan in the presence of his son Prashant and Yadav, it was amply evident that all three were acting in concert towards a singular aim of weakening the party and then replacing Kejriwal with Yadav as party head. This again shows malicious intentions towards party and its future and the unbridled ambition of Yadav to become national convenor.

3.    Shanti Bhushan followed up this scheme with an email to Arvind Kejriwal, issuing him an ultimatum to step down from Party else he would give press interviews wherein he would malign and defame Kejriwal. This shows how the trio had little respect for the party constitution, internal democracy and the party institutions like NE and PAC and the NC.

4.    Soon the trio facilitated the formation of an anti party forum called AVAM. There is substantial proof to show that Shanti ji and Prashant gave legal and all other kinds of assistance to AVAM to carry out activities against the AAP. Regular meetings between AVAM members and the trio were held at Bhushans' residence. When party members like Khetan pleaded with the Bhushans' to sop supporting AVAM, they were told by Prashant that for him AVAM was like a trade union within the party and he saw nothing wrong in aiding and assisting AVAM. He publicly embarrassed everyone while being accountable to no one in the party or outside. Prashant & Shanti Bhushan supported anti-party elements like AVAM. AVAM is the group that did everything to demolish and defame the party. Besides the Bhushans' the other big force behind AVAM was the BJP.

5.    There was a negative story published in The Hindu in last week of August, 2014. The story was negative and was clearly meant to tarnish the image of Party and its convenor Arvind Kejriwal. The story was not only factually incorrect it seemed motivated by vested interests. When the journalist who did the story was confronted as to why the facts were misrepresented, she said it could not be so as she was briefed by Mr Yogendra Yadav himself. This whole conversation was recorded and is available as evidence. This incident further substantiates the factum of the larger conspiracy to weaken the party.

6.    During candidate selection process for Delhi Election 2015, honesty and freedom (entrusted by NE) of DECG was always questioned, doubted. All kinds of allegations without substantive proof were levelled against the party processes and individuals in charge of picking candidates by Yogendra Yadav and Prashant Bhushan. And despite the agreement of majority of PAC and DECG on candidates selection procedure, Prashant Bhushan at several occasions threatened to demolish the party by doing a Press Conference. This kind of black mail culture and disrespect to majority views is again an anti-party activity and is against spirit of democracy. It is pertinent to add that complaints against 12 candidates became matter of public discourse after publication in major journals and newspapers and this was done to damage the electoral prospects of these candidates. One journal wrote about some winning MLAs that they were on Prashant Bhushan's list of suspicious candidates. This has never been denied by Mr. Prashant Bhushan.

Promoted
Listen to the latest songs, only on JioSaavn.com
7.    Worst part was when, a few weeks before elections, Mr Prashant Bhushan said in presence of a senior Party Leader and a Mission Vistar member that he would rather want the party to loose the elections so that Kejriwal could be removed and a major overhaul of the party could be carried out. Bhushan refused to campaign for the party and also planted several anti-party stories at a time when the party was going through its most severe crisis.
Kindly take appropriate action as soon as possible.