A Shattered Arm, Splinters In Chest - How A Navy Officer Defeated Death 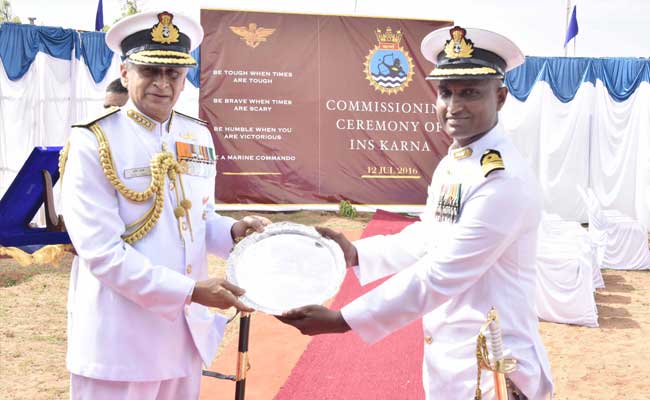 Captain Varun Singh (Right) overcame crippling injury to have a distinguished career in the Indian Navy.

New Delhi: Sixteen years ago, he was almost given up for dead - an injured commando whose survival would be nothing short of a miracle. When he was taken to the base hospital in Srinagar, doctors discovered 75 splinters on his right side, his arm in pieces, his right humerus - the bone that runs from shoulder to elbow - shattered. He also had a splinter in his heart. Death was just a few minutes away.

But Varun Singh hung on. Just.

Today, all these years later, Varun, who is a Captain in the Indian Navy, has taken command of INS Karna - a new base for the Navy's elite Marine Commandos in Visakhapatnam earlier this week. His determination to remain in service, fight through his grievous injuries and tenacity in overcoming all odds is a remarkable story.

"Becoming a commando was always a childhood dream. I used to watch Shah Rukh Khan in Fauji. All I wanted to wear was a camouflage uniform," he said. In many ways, Varun Singh was destined to become a soldier. "My father was in the Navy. My janamkundli said I will die in water. My father said, 'Let's meet destiny head on.' And I was named Varun, the God of water and the celestial ocean."

In 2000, Varun, then a young officer in the Navy, was posted in the Wullar Lake area in Kashmir with a detachment of highly trained marine commandos trained to operate in the marine environment. Known as the 'Dhaadi Wali Fauj' in Kashmir since they were allowed to keep their beards, the MARCOS had a primary mission - block the infiltration of terrorists through the lake at any cost.

"It was May, 2000 and infiltration from Pakistan had just started. There was a village called Puttushahi near Bandipora where 3 hardcore Al-Badr terrorists had been holed up in a house," he said.

Varun had been deployed on an early morning mission elsewhere but had no intention of letting go of any opportunity to take on terrorists and asked his Commanding Officer for permission to be deployed.

"The terrorists were hiding in a big house. There were quite few big houses in the area and my buddy and I sneaked into another building which was a vantage spot from where we tried to spot the terrorists," he said.

But there was no movement. "I threw a grenade into the second floor and then the first floor. Nothing happened. "The officer commanding the operation then suggested they try to bring down the building by throwing in an RDX bomb," he said.

Varun was called in. "I was a demolition expert. I checked the device which someone then threw into the house where the terrorists were hiding. The building caved in completely," he said.

The body of one terrorist was spotted hanging from the back of the building but no one had spotted the other two terrorists and the area had to be sanitised. 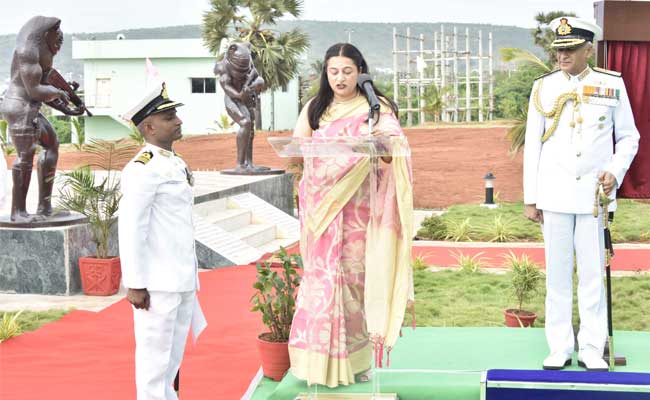 Captain Varun Singh took charge of INS Karna, a base of Marine Commandos this month.

Several jawans of the Army, who were also part of the operation joined Varun and his buddy as they jumped over a 5-foot wall at the rear of the building. "There was a cowshed and one jawan went to check it out when there was a burst of bullets. In the chaos which ensued, we didn't know where exactly the sound came from but everyone ran away to try and take cover on the other side of the same wall we had jumped over," he said.

Varun could have done the same when he noticed two soldiers who seemed to freeze where they were too stunned to move and unsure about what to do next. "I sat in front of the two jawans. I refused to leave them. It was then that the two terrorists emerged from the cow shed to try and shoot those who they had spotted trying to escape," he said.

The two terrorists were in clear line of sight to Varun now and he had not been spotted even though he was no more than five metres away from the enemy. "I took a pot shot. Opened up with my weapon. They both fell but one of the terrorists had his hand on the trigger and when he fell a round went off straight at me."

In a fraction of a second, everything changed for Varun. "The bullet hit a grenade which was on the right hand side of my chest. The grenade didn't explode. Instead it splintered and tore open my chest. I couldn't lift my right side. I lifted my rifle with my left hand and drifted in an out of consciousness," he said.

Varun's marine commando buddy had seen what happened and rushed to pick him up. He was taken to the Base hospital in Srinagar.

"The doctor said I had no chance but they refused to give up," he said. Doctors opened up his heart and removed the shrapnel lodged inside. He was also operated for a middle lobe lobectomy of the lung. Bone was grafted from his left hip to manage the injuries he received in his right humerus. There are more than 75 splinters still embedded in Varun Singh's chest and right arm.

"My hand was paralysed for more than a year and I spent two years in hospital," he said.

When Varun's 3-year-old daughter finally came to the hospital to see him, he couldn't contain his emotions any longer. "She sang me the Dhara oil ad - 'My daddy's strongest'. It was the first time that I cried."

In 2001, for his bravery, Lt. Varun Singh was awarded the Shaurya Chakra and continues to serve the Navy with distinction.