A mother's battle for her children, begun in Norway, stretches in India 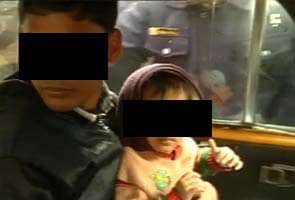 Kolkata: For the first time in nearly 18 months, Sagarika Bhattcharya spent the night with her two children on Tuesday. A court order allows a repeat tonight.

The 30-year-old's battle for son Abhigyan and daughter Aishwarya has been chronicled in courts and the media ever since they were taken away by child welfare services in Norway in May 2011.

At that time, Sagarika and her husband Anurup, a geologist in Norway, were accused of being negligent parents. In April last year, the court handling their case agreed to let the children return to India on the condition that they would live with their father's younger brother, a dentist named Arunabhash.

Sagarika returned to Bengal, estranged from her husband, and petitioned the Child Welfare Committee in Burdwan to have her children transferred to her care.

She alleges that her husband's parents, who live with Arunabhash, have been reluctant to let her visit her children. She also claimed they were not being looked after. The last claim was seconded by the Child Welfare Committee in its report.

On November 8, child welfare officials agreed that Sagarika was psychologically fit to bring up her own children.

Her in-laws did not agree, and the local police refused to let the children be moved, in an unsubtle rejection of the authority of the Child Welfare Committee.

Last month, Sagarika asked the Calcutta High Court to intervene. The case was meant to be heard yesterday. Perhaps that motivated the police to contact Sagarika; officers said the state government had ordered them to give the children to her.

Promoted
Listen to the latest songs, only on JioSaavn.com
So she went to her in-laws' house with the police and members of the Child Welfare Committee and got custody of the children. But in Kolkata, the judge at the High Court was upset by the police's intervention and ordered that the children be returned to their uncle immediately. By this time, Sagarika was more than halfway to Kolkata with the children, so they stayed with her.

At noon today, she met the judge in his chamber with the children. At 2pm, he announced that the children would stay with the mother tonight and a final order would be passed tomorrow.