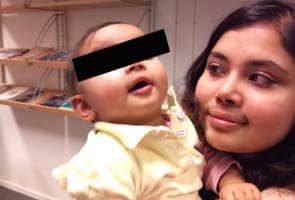 Kolkata: Eight months after her children returned to India after a lengthy legal battle in Norway, Sagarika Bhattacharya was able to take them home.

The 30-year-old has been granted custody of her son Abhigyan and her daughter Aishwarya by the Calcutta High Court.

In November, the Child Welfare Committee in Burdwan ruled that the children belonged with their mother and not with her husband's younger brother, a dentist named Arunabhash.  But the police had refused to transfer the children from her husband's family to her care on the grounds that they needed court orders.

The story of Aishwarya and Abhigyan, and whose care they should be placed in, has been in the headlines since May 2011 when child welfare services removed them from their parents' home, citing negligence and abuse.

The Bhattacharyas said that their actions had been misunderstood and misconstrued in court.  The fact that Aishwarya slept in her parents' bed, for example, was described as poor parenting.

A court in Norway then allowed the children to return home on the condition that they would live with their father's brother, Arunabhash, who lives in Bengal's Burdwan district in a place named Kulti, about 250 kms from Kolkata.

She alleges that his parents, who live with Arunabhash, have been reluctant to let her visit her children.  She also claimed that they were not being looked after, so in in June,  she applied to the Child Welfare Committee of Burdwan to move them to her home.

Child welfare officials who visited the children then concluded that foster care was not doing them justice. Sagarika was asked  to undergo medical and psychological tests. She did so at a government hospital in Kolkata and got a clean chit.

Promoted
Listen to the latest songs, only on JioSaavn.com
The police and her in-laws, however, insisted the case was an international one, which was over-ruled by India's additional solicitor general Indira Jaisingh