As they dug a small grave for their child, their spade struck something hard. It was a clay pot and, from inside, they could hear an infant crying. That, local police say, is when the villagers discovered a newborn, buried alive. 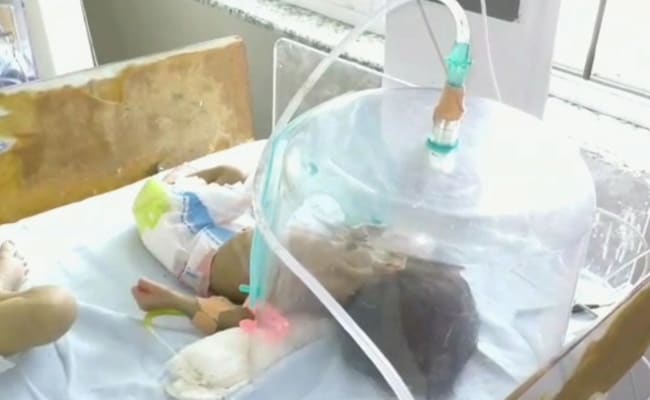 The infant had respiratory problems and was put on a ventilator.

The couple was at the cemetery in India to bury their baby, who died minutes after birth.

As they dug a small grave for their child, their spade struck something hard. It was a clay pot and, from inside, they could hear an infant crying. That, local police say, is when the villagers discovered a newborn, buried alive.

She was no more than two or three days old, according to police in Uttar Pradesh, who were quickly summoned to the cemetery on October 10 and transported the baby to a local hospital.

The infant had respiratory problems and was put on a ventilator according to Alka Sgarna, the medical superintendent who treated her and spoke to CNN. The baby also suffered from an infection and was underweight.

"We are looking for her parents and it is possible that they are involved in it," local police superintendent Abhinandan Singh said at a briefing. "Such an act is difficult without their involvement. We have deployed police teams, even in civil dress, to trace the suspects."

He vowed that authorities "will take strict action against the culprits."

Investigating officer Pradeep Kumar Singh told the Washington Post on Tuesday that nobody had witnessed the girl being buried alive, and noted that the cemetery was located in a rural rural area and has no closed circuit television. Though they had not found the individuals responsible, they had filed charges against the unknown perpetrators for attempted murder and abandonment of a child.

India suffers from a significant gender imbalance in its population owing to a societal preference for sons, according to a government economic survey spanning 2017-2018. Abortions to terminate female fetuses are prevalent, according to the report, and even when such sex-selection tactics are not undertaken families will often continue trying to have children until they have a son, resulting in millions of "unwanted" girls.

An estimated 63 million women are "missing" from India's population, according to the report, due to sex selection practices.

Some infant girls like the one found in miraculously alive in the Uttar Pradesh cemetery are abandoned or killed because of their sex.

It has been four days since the baby girl was discovered, Pradeep Kumar Singh said, and still nobody had claimed her.

(Except for the headline, this story has not been edited by NDTV staff and is published from a syndicated feed.)
Comments
Uttar PradeshAlka Sgarna