10 Killed In Rain-Related Incidents In Uttarakhand 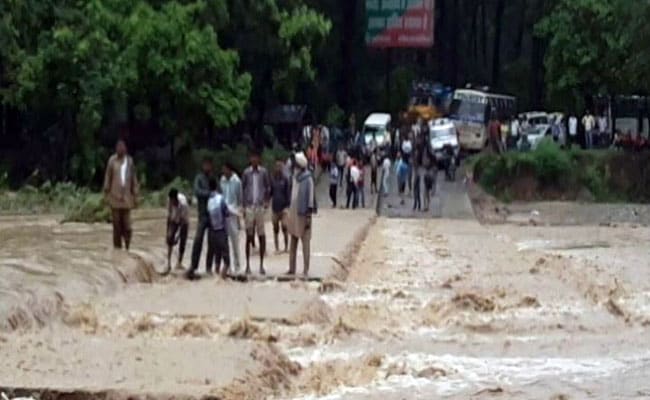 Death toll in rain-related incidents in Uttarakhand has climbed to 10.

Dehradun: Four people were today killed in Uttarakhand's Tehri district when their car was hit by debris falling from a hillside following a landslide triggered by heavy rains, taking the toll to ten even as the Ganga, Yamuna and their tributaries went into spate.

Bhagirathi, Alaknanda and Mandakini rivers were flowing close to the danger mark prompting authorities to evacuate people living close to the rivers to safer locations, an official said.

The debris falling due to the landslips have blocked a large number of roads in the state, including national highways affecting the Chardham and Kailash-Mansarovar pilgrimages.

Chief Minister Harish Rawat visited the Disaster Mitigation and Management Centre and asked officials to keep themselves prepared to deal with any emergency in view of heavy rains lashing most parts of the state since Friday.

Landslip debris hit a car near Narendranagar bypass on Rishikesh-Gangotri national highway when it was on its way from Rishikesh to Chamba, SDM Narendranagar K K Mishra said.

All the four occupants of the car were killed on the spot, he said.

Police, BRO, SDRF and army personnel pulled out the mangled bodies of the victims from under the rubble and the crushed car.

The highway has been closed following landslides and over 250 families of Kumharkheda have been shifted to safer locations, the official said.

There was a major landslide in the upper part of Rajmahal bypass at around 12 am today and the pebbles and boulders hit the car, Mishra said.

The deceased have been identified as Viresh Shrikoti, 32, Umesh Rawat, 33, Mukesh Gusain, 33, and Shyam Nautiyal, 36. With these deaths the toll in rain-related incidents in the state has climbed to 10.

One woman was killed on Saturday morning when the bus she was travelling in overturned after being hit by the overflowing waters of a swollen canal at Haldwani in Nainital district.

Two more deaths were reported late last evening from Uttarkashi where a tree fell over a cowshed killing one on the spot and leaving two injured out of which one died on way to hospital.

In another incident in Pauri district, a car skidded off the road which had become slippery due to rain on Saturday evening and fell into a gorge killing three and leaving two others injured.