On Saturday, the Shaikhs were handed the Ujjwala scheme certificates by Prime Minister Narendra Modi at a function held in Aurangabad. 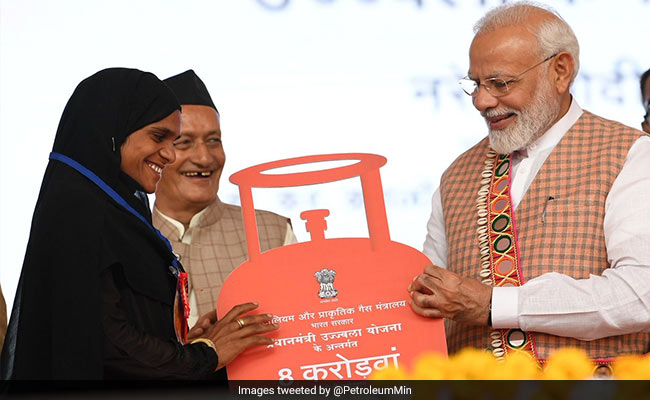 Cooking food using domestic gas may not be a big deal for many but for beneficiary number eight crore of the Ujjwala scheme from Maharashtra, Ayesha Shaikh, getting the new gas connection deserves a feast and what could be the better option than ''biryani''?

For the daily wager, who is a mother of five, from Ajanta village, the days of fetching dry wood from nearby areas for cooking on a humble ''chulha'' are over.

Ayesha and Rafiq Shaikh, who are from Aurangabad, have become beneficiary number eight crore of the ambitious Pradhan Mantri Ujjwala Yojana (PMUY) which provides LPG connections to women from Below Poverty Line (BPL) households.

On Saturday, the Shaikhs were handed the Ujjwala scheme certificates by Prime Minister Narendra Modi at a function held in Aurangabad.

Speaking to reporters after her felicitation, Ms Ayesha said, "First thing I will be doing is cooking ''biryani'' once I get the cylinder and stove. I am happy as the new connection will save my labour."

Ms Ayesha said she had been dependent upon wood for cooking, which is a labourious daily chore that occupied significant amount of her time.

"I had to fetch dry wood from nearby areas, which was a laborious task. Now, I will have some relief as I can cook in less time," an elated Ms Ayesha said.

On Saturday, the government achieved the target of giving eight crore free cooking gas (LPG) connections to the poor nearly seven months ahead of schedule.

Ayesha Shaikh said she had applied with a local gas agency in Ajanta village for a free connection around a month ago.

"I received a call from the agency a couple of days before the Saturday function of Prime Minister Narendra Modi in Aurangabad. Till then I did not know that I was the eight croreth beneficiary," she said.

Under PMUY, the government provides a subsidy of Rs 1,600 to state-owned fuel retailers for every free LPG gas connection that they give to poor households. This subsidy is intended to cover the security fee for the cylinder and the fitting charges. The beneficiary has to buy her own cooking stove.

As per official data, the scheme, together with the government's push to replace polluting firewood in kitchens, has led to LPG coverage rising to about 95 per cent of the population from 55 per cent in May 2014.

The scheme has emerged as a welfare flagship of the Modi government.