80 Crore Damage To Be Paid By Citizenship Law Protesters: Railway Board Chairman

Railway property was also vandalised in Assam, where Northeast Frontier Railway claimed to have suffered additional losses because of cancelled trains 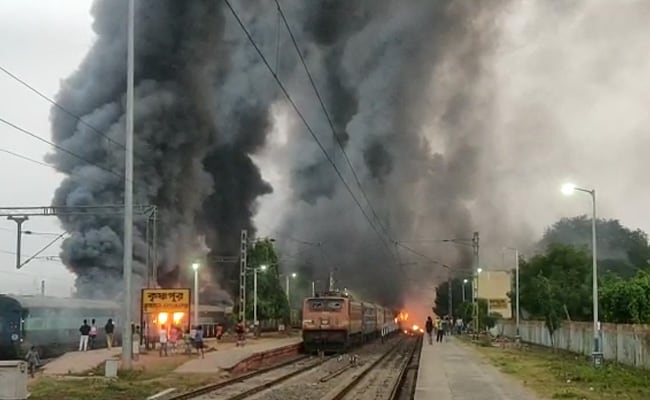 Railway property worth Rs 80 crore was damaged in protests against the citizenship law and compensation for the same will be recovered from those involved in arson and violence, the Chairman of the Railway Board said today.

Of Rs 80 crore, Rs 70 crore worth of property damaged was of the Kolkata-headquartered Eastern Railways.

Earlier this month five empty trains were set on fire at a railway station in Bengal's Murshidabad district, which comes under Eastern Railway. Hundreds of people also partially burnt down or vandalised several rail stations in Howrah district, Malda and Murshidabad.

"There has been damage of railway property worth Rs 80 crore during anti-CAA protests. Of this, the Eastern Railway suffered damage worth Rs 70 crore and the damage suffered by the Northeast Frontier Railway was worth Rs 10 crore," Vinod Kumar Yadav, the Railway Board Chairman, was quoted as saying by news agency PTI.

"The damage - panels were set on fire, signalling systems were damaged - will be recovered from those involved in arson and violence. This, however, is a preliminary estimate and the figure could go up after the final analysis," Mr Yadav said, adding, "The RPF (Railway Police Force) is coordinating with state governments to identify culprits. Once identified, efforts will be made to recover the damage".

A fortnight ago, Chief Minister Yogi Adityanath said his government would seize "properties of those involved in damaging public assets" as means of compensation for violence in Lucknow and Sambhal. The property would be auctioned off to pay for damages, he said.

Bengal chief minister Mamata Banerjee had dismissed the arson as "one or two incidents" during a popular movement. In her recent anti-CAA rallies, she also protested ordinary people being slapped with compensation notices for allegedly vandalising government property in UP.

Railway Minister Piyush Goyal demanded strict action from Bengal Chief Minister Mamata Banerjee; Mr Yadav said today the state was working to resolve the situation and "recoveries will be made".

According to news agency ANI, those guilty of damaging railway property could be charged under relevant sections of the Indian Railway Act, which allows for a maximum prison term of seven years.