Speaking to reporters on the occasion, BJP national president JP Nadda said, "From today till October 7, crores of BJP workers in the country are contributing to promoting the use of Khadi in order to increase its usage." 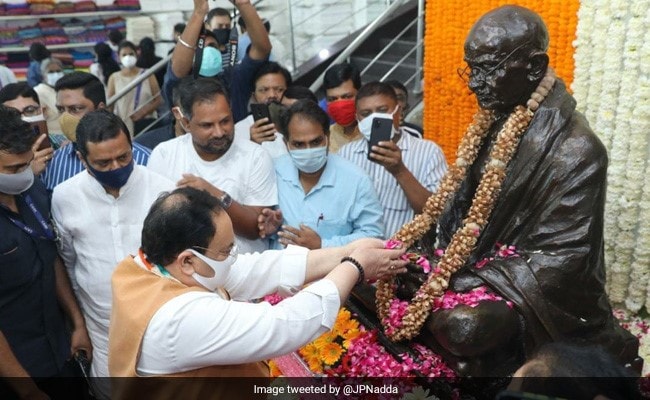 On the occasion of Gandhi Jayanti, JP Nadda visited the Khadi India store.

On the occasion of the 152nd birth anniversary of the nation Mahatama Gandhi, BJP national president JP Nadda on Saturday announced that starting today, 7 crore party workers from across the country will contribute to promoting the use of Khadi.

On the occasion of Gandhi Jayanti, Mr Nadda visited the Khadi India store.

Speaking to reporters on the occasion, Mr Nadda said, "From today till October 7, crores of BJP workers in the country are contributing to promoting the use of Khadi in order to increase its usage."

He further said that Prime Minister Narendra Modi's call for "Self-reliant India" and "Vocal for local" has given new life to the Khadi industry.

Born on October 2, 1869, in Porbandar town of Gujarat, Mahatma Gandhi or Mohandas Karamchand Gandhi adopted a non-violent resistance and was at the forefront of the freedom struggle against colonial British rule.

This led to India finally achieving India's independence in 1947. Fondly known as Bapu, his unwavering belief in "Swaraj" (self-governance) and "Ahimsa" (non-violence) won him accolades across the world.

Globally, Mahatma Gandhi's birth anniversary is celebrated as the International Day of Non-Violence. Several events are held in India and across the world to mark the occasion.

Mr Nadda further said, "Lal Bahadur Shastri ji, who was humble in nature but a bold decision-maker, remained in the administration for a very short time, but in a short span of time, the direction he gave to the country through his talent, built the country."

Lal Bahadur Shastri was born on October 2, 1904, in the Mughalsarai district of Uttar Pradesh. He shares his birthday with Mahatma Gandhi.

He coined the slogan "Jai Jawan Jai Kisan" which resonated with the masses and was widely accepted. On January 11, 1966, he died in Tashkent after a cardiac arrest.

Parliamentary Panel Recommends Evaluation Of Vaccines In View Of Omicron