According to data compiled by the election department of Jammu and Kashmir, out of 598 wards spanning across 40 municipal bodies in 10 districts of the valley, polling was held only in 186 wards. 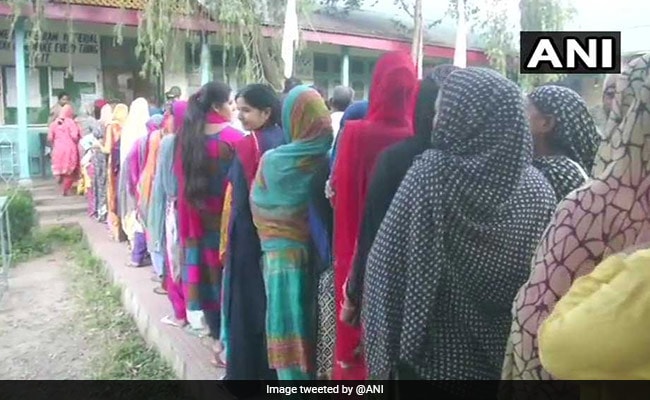 Stringent security arrangements were made for the smooth conduct of the polls. (File)

The just-concluded urban local body elections in Kashmir witnessed poor voter turnout but these polls will perhaps be remembered for the dearth of contestants as 69 per cent of 598 wards in the valley did not require any polling.

According to data compiled by the election department of Jammu and Kashmir, out of 598 wards spanning across 40 municipal bodies in 10 districts of the valley, polling was held only in 186 wards.

The remaining 412 wards - constituting 68.89 per cent of the total - did not require any voting.

The government had made elaborate security arrangements to secure polling staff and polling stations but kept the identity of candidates, who dared to defy terrorists threats, a secret for security reasons.

As a result, there was no campaigning for these elections and in most cases the candidates chose to remain anonymous.

Over thirty per cent of wards in these 40 urban local bodies across Kashmir valley will remain unrepresented.

No nomination papers were received from 181 wards (30.26 per cent) for the elections. Most of these wards were in the third phase of the polls - 62, followed by 56 in the second phase, 44 in the last and 19 in the first phase.

Out of the 598 wards, 231 wards - 38.62 per cent - were those which saw no contest and the solitary candidate in each of these wards was declared winner unopposed.

While 69 of these wards were in the first phase, 61 were in the second, 49 in the third and 52 in the fourth and last phase.

In these polls, six municipal bodies had two or less contesting candidates in total - two of them zero.

Frisal in Kulgam district and Khrew in Pulwama district - both in south Kashmir - received no nomination papers from any of the 13 wards each body has.

In total, out of the 40 civic bodies in the valley, voting did not take place in 27 of them.

Stringent security arrangements were made for the smooth conduct of the polls, while candidates at many places were taken to secure locations - which meant no visible campaign for the polls in the valley.

The state's two main parties National Conference (NC) and Peoples Democratic Party (PDP) - along with CPI(M) stayed away from the polls because of the legal challenge to Article 35-A of the Constitution in the Supreme Court.

Separatists in the valley had also asked the people to boycott polls.